As a teenager I lugged around an aluminium army water bottle. After about an hour the water tasted of how I imagined mercury. I probably then swapped to plastic soda bottles; these became available at the time. Yes, reader, I'm old enough to remember these being introduced! Anyway; at some point, I think in my early twenties, I embraced modernity and bought a set of platypuses. You know, the lightweight, foldable water bottles. The more you drink from them the less space they take up in your bag. And they last.

I had three. They were with me on many trips! I think they're a brilliant invention. but all good things come to an end, and the first died on Senja. We were doing our annual winter hike, and my platypuses were with me, even though only one has some thermal insulation. So on the last evening I had one of them in my clothes; that way I had water at hand, and it wouldn't freeze. I was tired that night, so I was also cold. And my feet hurt. That was when the seam of the bottle gave. I noticed something unpleasant, looked down, and saw icicles coming out of my trousers. Not good! And the second one started leaking on the even of a caving trip. One down. It went with me to Dovrefjell, but I have decided to retire it; it's clear that these bottles have reached the limits of their durability. And maybe it's better not to wait until it starts leaking. 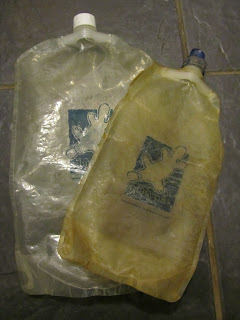 My two remaining platypuses. The small one has been underground with me several times; hence the colour. 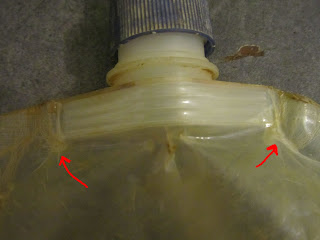 Where the small one started leaking 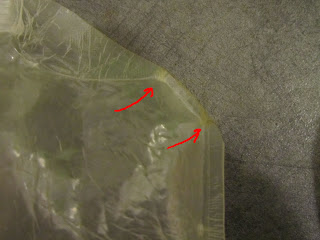 Where I think the big one will soon leak

So I bought two new bottles. The shop I went to for that purchase didn't have Platypuses; they sold Source. Does it matter? No. But I did get nostalgic when I realised the Platypus era had ended. In a way, they symbolised my change from army-surplus-equipped teenager to affluent, GoreTex-clad hiker (other brands are available). And that transition is now so long ago, almost all traces have now vanished. When packing for Dovrefjell I wondered how much of my equipment actually still stemmed from my time in the Netherlands: some fleeces, my sleeping bag, my mug... not much! Where did the time go? 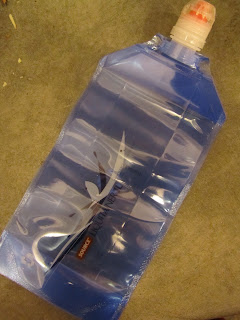 One of the new bottles! A new era has begun.
Posted by Margot at 08:52