It had been a day of solid spreadsheet work. My eyes were square and my head filled with numbers. So when the evening trip turned out to visit a very muddy venue I figured that would be a spiffing chance to solve all that.

This mine is quite a walk from where you can park your car. So we had a nice, though somewhat sweaty, walk through the woods. It's not easy to find a sartorial ensemble that accommodates an uphill walk on a somewhat sticky evening, AND wading through chest-deep cold water. Dave struggled a bit.

When we arrived at the entrance we sent the newbies in first. Then those who had been there before went in. Dave was following at some distance. When we got in we had the fun of seeing how those unfamiliar with the chest-deep and cold gloopy tomato soup of Wheal Russel liked it. They did indeed conclude it was cold. And deep. And weird. But as could be expected they liked it!

When we reached the entrance chamber they were suitably impressed. It IS pretty! So I took my chance when everybody else went on. I put my camera down and tried some pictures. And while I was faffing around like that I noticed I heard very heavy breathing behind me.

Mine tunnels can transport sound rather well. I could hear Dave come in. And come all the way through. He was zonked when he reached me. And when he had his breath back he suggested we go in together; me with one of his flash guns. I was flash monkey again! It was a good idea.

My own pictures would not turn out too well, so choosing this auxiliary post was a good one. And I ended up with underground glamour photos! And, as I noticed in the shower: also with a nice two-tone body. The lower part bright orange; then a high water mark at chest height, and lily white above that. Might be my new look for the summer! 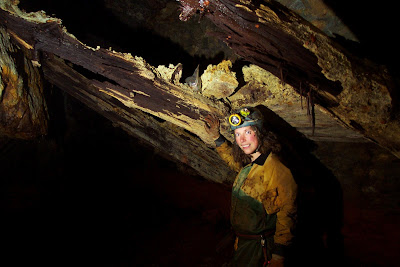 Rotting timbers in the entrance chamber 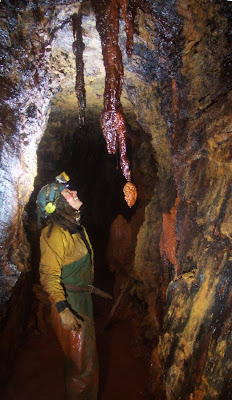 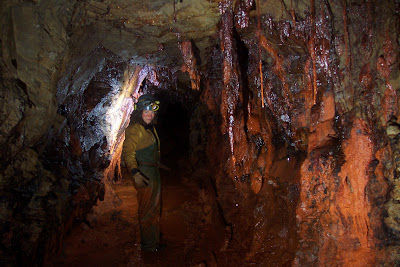 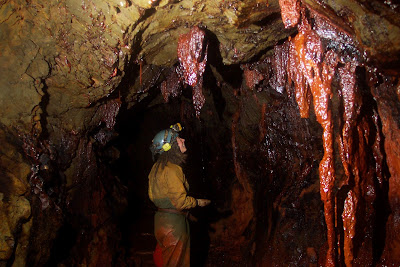 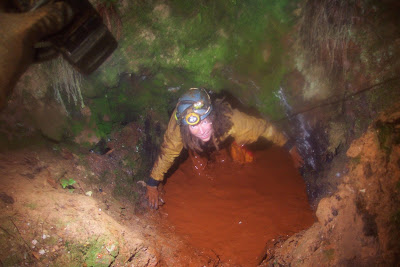