Not Snowdonia yet - first a nuisance

The day after I came back from Snowdonia, Rick would give a talk in Liskeard, and of course I wanted to see that. I would drive up to another caving lady and then we would dirive together, picking yet another caver up along the way. But it wouldn't happen that way. When I got to my car I saw that the wing mirror was dangling down. Maybe someone had parked clumsily and knocked it off! Or it had been vandalism. Not nice.

I also noticed parking tickets. Again my parking permit had fallen from the windscreen. My trust in sticky tape had been too big! But walking around the car to put the parking permit back I saw my other wing mirror was even in a worse shape. It was dangling down, glass missing. I couldn't possibly drive like this. And it was evident: this was vandalism. You don't accidentally knock off the mirrors on both sides.

It was only my car; all other cars in the street were fine. Was this a personal thing? I don't have many enemies, but the last few months my downstairs neighbour seems to have it in for me. I hope it wasn't him, but just some boisterous youth who arbitrarily targeted my car, and not a personal vendetta. We'll see. The car is at the garage now. If it gets damaged as soon as it gets back it probably is personal. Not sure what to do then! I don't think the police will prioritise such things.

But not all was bad. The lady that I would share transport with came to pick me up. We were slightly late, but we saw most of the talk! Most people are really nice. Just too bad these few not-so-nice people can really spoil your day if they want... 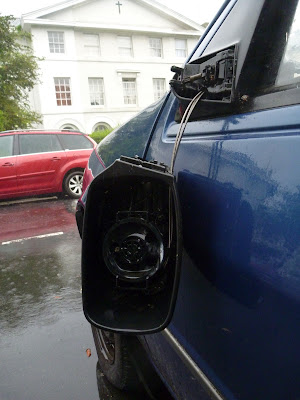