I thought I had a small office. I did not complain; it was located in some forgotten, out-of-the way corner of the building; the sun hardly reached there, so it hardly ever got hot in my office. I really don't like a hot office; it's very uncomfortable to sweat when you're sitting still, and heat makes my feet hurt. In Amsterdam and Norway my office was a sitting duck for summer sun, but finally, in the rainy southwest of England, I found solace. 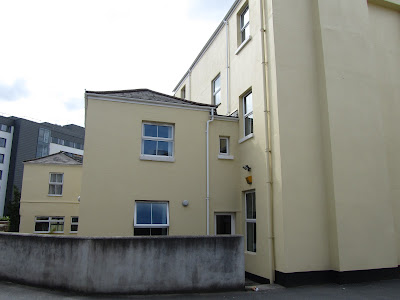 The remote corner of the building where my office has been until now.

But it couldn't last. The whole school was ordered to move house. We would move out of the twee terraced houses, and into a serious office building. I didn't look forward to that; the building was notoriously unventilated, and as I'm fairly low down on the pecking order, I would most likely end up in a quite stuffy office. Not nice. 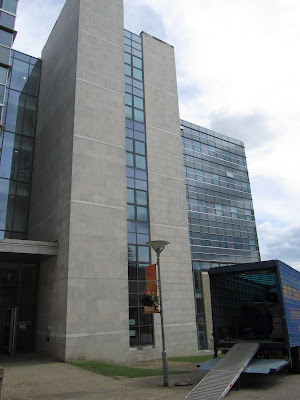 The new building we all move to. The moving lorry shows it's already started for real...

As I am only a postdoc I would have to share; the plan was that I would move to an office with two desks. One for me, one for guests. Most of the time there would be no guest; the only person mentioned as using that desk was a postdoc working from a distance. She lives somewhere in the North, and would only rarely visit Plymouth, but if she did she would need a desk. That configuration would mean I would get a stuffy office, but at least a quiet one, with lots of space. It would not be.

One day I got an email, telling me what day my stuff would be moved. I was a bit puzzled; the mail was sent to three people. One indeed my promised incidental office mate. And then another postdoc. What was this? The other postdoc asked the very same thing. 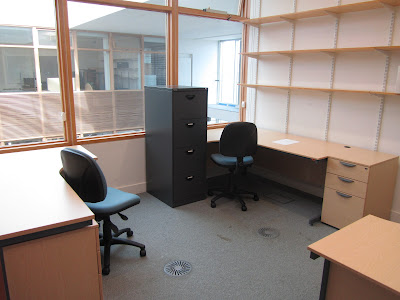 Soon my office. I chose the desk in the far corner. 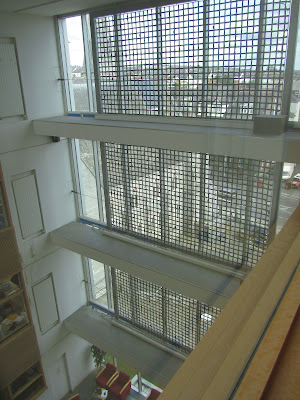 If I lean as far left as I can I have this view, through the atrium, to the outside world.

It turned out that all these elaborate plans and consultation had, at the last minute, been swept away by the powers that be, and it was decided "my" office would hold me, the two other mentioned postdocs, but both sharing one desk, and then yet another desk for the next person the school would employ. What? I don't mind sharing, even if it means I get even less space than the already quite limited amount I originally had; we don't get much space in the new building. But I wasn't too chuffed about having to find out through enquiring why that email was sent to all three of us. If you change the plans, you tell the people involved. And the other postdoc had been promised a desk of her own. 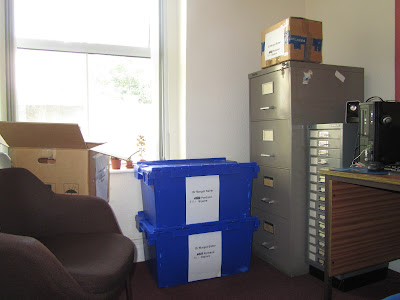 All my stuff in labelled boxes

It will happen that way anyway. We did protest loudly against changing the plan without informing us; I hope we made so much noise next time management will not repeat such behaviour. And now I've packed my stuff to move into this 4-person-office. My old office will seem enormous in comparison! I hope the stuffiness and crowdedness won't be too bad... luckily the summer is practically over! 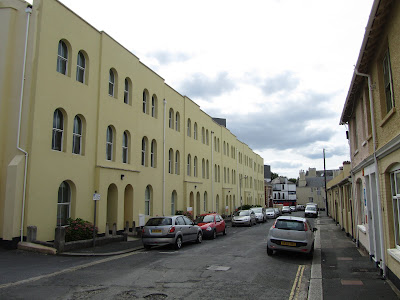 I'm intrigued by those drains in the floor. For when you feel the urgent need to slaughter a goat in your office?

Yes! A goat. Or a colleague. Or a student. Might come in handy on many occasions! :)