I'm a bit arrogant about rope work. I can do it! So when there was another SRT practice organised by the cave resue team I got ready for an uneventful evening. Which suited me fine: slamming into tarmac is not a good prepapration for die-hard rescue training. But I would have to step up my game.

What I wanted to train on was rigging, but the training officer had forgotten to bring the stretcher, so there was none. Where the stretcher would have been, I just went up and down the rope, and then helped a member who doesn't really likes dangling from ropes above menacing depths. 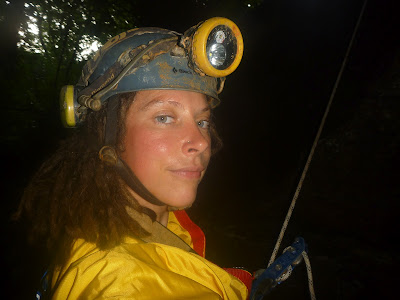 As I do actually like rope work I went to a higher cliff with a more complicated route, and went up. And this route had horizontal bits! That was fun! Not necessarily difficult, but I had never done something like that. So it was not only novel fun, but also a nice training in humility. That's needed too, once in a while!
Posted by Margot at 14:56