A cyclist died on the London roads. It can't have been the first time. This cyclist, though, was run over by an Olympic bus full of media people. So his sad demise got a lot of attention. And immediately, Bradley Wiggins jumps up and claims helmets should be made compulsory. A bit premature; when he said that it wasn't clear yet if this cyclist had been wearing one. 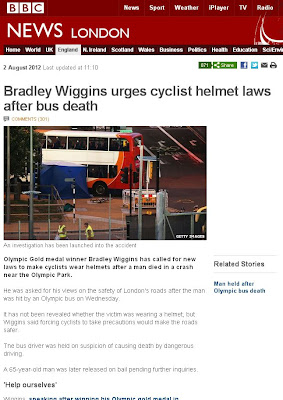 On the same day this was in the news, David Cameron attracted attention by biking to work while not wearing a helmet. Is that bad? Does it mean he sets a bad example? The Guardian website asked if we, readers, think wearing a bicycle helmet should be made compulsory. (And the question has already been described as a diversion, elsewhere on the Guardian website!) 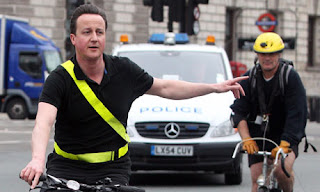 I wondered if I should reply. I am Dutch, so my first reaction was "no of course not! That's ridiculous! Nanny state!" but then I thought a bit longer, and had to admit to myself that a bike helmet does not have any real big disadvantages, and it may save lives. So why I am being so opposed? It shows the power of what you're used to. If what I grew up with is objectively a bad thing, I should be able to abandon it.

But then I thought a bit further. Maybe I should just stop being so Dutch and wear that helmet. I own one! It tends to spend its time gathering dust. I don't wear it for these few traffic-low minutes of daily commuting. It does come out for serious rides, especially those that involve 1) hollow, winding , narrow country roads with lots of blind curves 2) steep slopes.

But then the question of making it compulsory. I think the UK could do with much more biking; this nation is alarmingly unfit and obese, and biking more would lessen that. And shrouding the advantages of biking in patronising legislation might keep people from taking to this lovely activity. How many people would be saved from death by a bicycle helmet? And how many would be deterred from biking by a helmet law? And how many of these would die of obesity-related causes? And how many would not, if only they biked more? And how does that compare?

I think it might be so difficult to answer that second and third question we can never compare. But I could try asking "more or less"! If anyone has a chance of figuring this out it's them. And until that time I might ponder what would happen if you not only made the helmet, but also the bike compulsory...
Posted by Margot at 13:00