There are advantages and disadvantages to living next door to a cultural centre. The good thing is, of course, that if you want culture you don't have to travel far for it. I had already been to a play and a film (which I did not blog about - oh dear). And Dilwyn, the manager, keeps telling me to come to all the gigs. I'm not much of a gig person! I'd rather go to bed early.

Dilwyn is a nice chap, but that is not the only reason why he keeps inviting me (for free, even); he is worried about the noise levels. The hall isn't very well sound-insulated. So I can often enjoy the music inside my house. Or perhaps hear it without enjoying it. The neightbour says that Rose had a habit of storming up there in her dressing gown to tell them to turn the music down. Dilwyn senses a new era! If he can keep me in the hall during concerts I can't complain about them. So far I haven't taken up his offers.

When I had bumped into him recently he told me about a gig by a bunch of Congolese septagenerians on the day Wim and Joke would arrive. I told his I figured I would thus have other things to do. He just invited all three of us! But Wim and Joke (more on their visit in separate blog posts) weren't keen. We had a nice cup of tea and they went to their accommodation.

A bit later there was a knock at the door. Dilwyn! With a noise meter. And a charming smile. WOuld I come see the end of the concert? And I thought 'why not' as the music sounded good. So I followed him! He asked me what I wanted to drink, and fetched me a Glaslyn. And I went in! And the band was amazing! Very catchy music, and they had marvellous dance moves too. And the room was full, and almost everybody was dancing. They had to crowd in their hands! Who would have thought. I was glad I went! This was great, and I should go more often, and support the local cultural scene! And the bands that bring the vibe. Whatever unexpected band that will be next time! 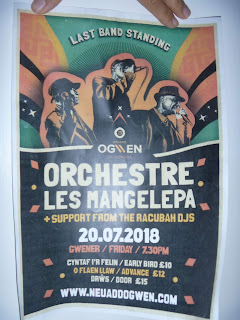 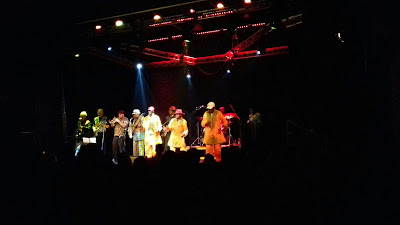