We would be going back to Holyhead Mountain. That's nice; I like the place. But there are routes of all kinds of difficulty there. Which would we pick?

When I drove up with Eifion he said there would only be three of us; we expected Simon too, but he didn't want to do anything too difficult. Oh dear! But if there are only three you tend to manage to make it interesting.

When Simon showed up at the parking lot he had his daughter in the car too. And he explained that that wasn't all; her boyfriend had been visiting, and they had just dropped him off at the railway station. But there had been a travel disruption, so Laura (the daughter) would just go back and pick him up again. Then they would join us!

We walked up. Eifion had a route for us all in mind, and Simon wanted to rig a route that was pretty much a scramble for Laura and her chap. The route was longer, but it turned into a proper climb and he wasn't sure the youngsters were up for that. So Simon disappeared, and Eifion lead 'our' route. Then I seconded it. It wasn't very hard! When I was up I had a look how Simon and the by now appeared youngsters were doing. They were still in the middle of things! But we didn't want to de-rig our route, as they may want it later. What to do? I asked Eifion to lower me again. I got my bag with my dinner and my tea in it, and the guide book, and with that I climbed back up. Time for a picnic! 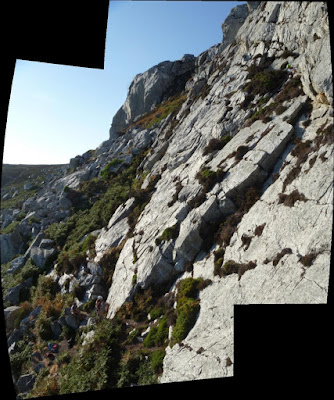 Simon and his relatives on their scramble


After a while Simon called. Were we terribly busy? Well, no. Why? He had realised he wasn't comfortable scrambling back down without a rope. Nor was he comfortable climbing further up. That meant he could only get out of the situation by sacrificing some gear! Which he hoped to avoid. Could we either come and lead the route for him so we could walk off from the top, or walk to the top and rig a top rope for him? Of course we could. We chose the latter option.

We did as requested. Simon de-rigged his own rope and was lowered back down. Then Connor tried the climb, and then Laura. I quickly did the upper bit. Then it was time to go! It had been a nice evening but a bit more challenge would be nice!