Show ten foram experts a foram and chances are, they will come up with five different names for it. We had seen it when we did “theElphidium game”. And that tells you taxonomy is partly a personal choice; as long as you know why you call something a certain species, and you are consistent, you do the best you can. And part of taxonomy is also learning what other people might call something. If you find Haynesina germanica where someone else only finds Nonion depressulus, it is worthwhile to realise that might not be an ecological change, but just a different moniker.

Does that mean you can just do what you want with foraminifera taxonomy? No, of course not. I had stared at my Norfolk forams for months, tried to identify them, looked up what other people had made of them, learned to recognise the Cretaceous forms that had ended up in my much younger sediments, and had come up with quite a good guess of what species I had in there. But it’s hard to be sure; I have many Elphidiums in there, for example, and there just are so many of them. The online World Register of Marine Species mentions 161 species. And that’s far from exhaustive; I already saw some that were not among those 161. And quite some of these species will be synonyms, but still. No way you have specimens, or descriptions in books, or good pictures, of all those species. At some point you have to just pick one and stick with it. But it helps if someone, who has seen many more of these 161 species (and much more species of non-Elphidiums!) has a look at them.

So when I had my draft classification I went to one of our proper foraminifera specialists; not a specialist-by-proxy such as me, who just uses them for various applications, but one who studies them for their own sake. I gave him a slide with the forams I had encountered in my samples, and what I thought they were. He promised to have a look at them.

Then some slightly nervous days passed. What if I had it all wrong? What then? But then he gave me my slide back. And basically, everything was OK. I could finalise my counts and start drawing the graphs. Which I did! With renewed faith in my taxonomy skills. The details in taxonomy remain a personal thing, but these are now built on a stronger framework! 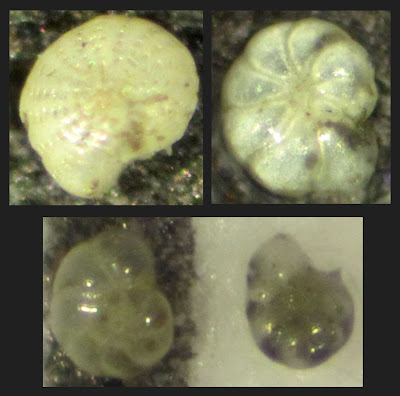 Some of the species I find in my samples
Posted by Margot at 09:38