On January 2nd I went for a run! And now I hope I can keep it up. It's not like I don't like running; it's just that I have to find a place for it in my life. When we moved office it became very cumbersome to do our usual pre-lunch runs; in our old office building we had a shower, but the current one doesn't. And as the old buildings have not been torn down or put to different use, we could in theory run, go back to the 5th floor to get our clothes and a towel, borrow the key of the old building, go back down five floors again, walk to the other side of campus, have a shower, and go back to our offices. But that takes too much out of the working day. And I don't have an office for myself anymore; I couldn't hang out my stinking kit in my new shared office, especially as we can't open a window.

As I can't feasibly run from work I will have to run from home, which is a bit of a bugger. I'm not a morning runner, and I generally get home too late to feel like running after work (and in winter it's dark when I get home- not ideal). And in the morning, beside my failing enthusiasm, there is the issue of sometimes waking up at Hugh's and not having kit there, and the other issue of him sometimes waking up at mine, and not having kit there, so then I would have to abandon him to run myself. It's not ideal! But I'm getting terribly fat and unfit and I'm determined to try to somehow get myself running before work anyway. As it's more efficient than running after work (you only need to shower once). I did find a nice route. I hope I can kick myself along it at least three times a week! 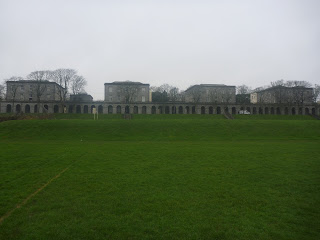 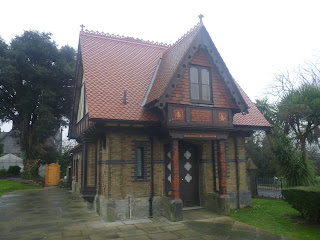 And past the cute cottage in Devonport Park

ps It will not be as easy as I thought! Later that day I felt my tonsils swell up to disconcerting size... maybe time to take it easy for a while. I seem to rarely escape the attacks of that ailment for a whole winter!
Posted by Margot at 13:13

I take your concerns about getting terribly fat about as seriously as other people take mine, but I do hope you'll be back on track soon.