To the beach during working hours


If you want to know what lies under your feet, you can of course try to drill a hole and see what you find. You can also use more modern ways, and use geophysics, such as Ground Penetrating Radar (GPR), to get an idea. But you can also just sit around and wait until erosion strips off the familiar surface layers and grants you a look below.

About two years ago, anAmerican hydrologist spent his sabbatical in the southwest. He was an oldfriend of Roland, and they worked together on a project that involved hydrological modelling of a coastal valley. They knew there was a 3000 year old peat layer in there somewhere, which made that valley hydrologically interesting. In order to gain input for the model they took cores of the subsurface, and mapped it with GPR. All well so far.

And then the sea stripped all the beach pebbles off of this peat layer. An opportunity not to be missed! Having a look is always more telling than the other, rather indirect ways of perusing. Locals who knew of Rolands interest in this peat contacted him about it, and he wanted to go and see for himself. And survey the whole package in. That’s a task that is best done with more than one person, so he asked me to come along. Prancing around a beach during working hours? Oh well, I’ll sacrifice myself!

We gathered early at the university’s equipment store, loaded up the differential GPS, and drove over the quiet roads below pink skies and past valleys filled with morning fog to Hallsands. It’s a nice beach I had never visited. And the peat layer was impressive! Red tree stumps were sticking out. I took some pictures while Roland started the assemblage of the DGPS. It had been a while since we had last used it, and it took us forever to get it going; I had trouble getting the tripod exactly above the benchmark (that Roland and his mate had put in earlier), and perfectly level too. Roland struggled with getting the software to work. But we managed! And from then on it was easy: the equipment does the work. Just hit “measure” and go. Which was good; the weather was deteriorating! When we were done Roland tried to download the data in the dryness of the car, and that’s also where we had lunch. It was properly pissing down. In a short dry-ish spell we dissembled the DGPR again, and off we were. By now, all that data has reached the USA! I think that model will improve significantly… 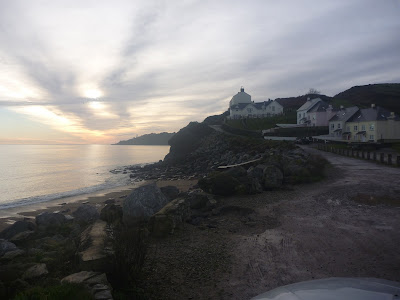 This is how we found Hallsands

The slab of peat, as exposed at the surface! 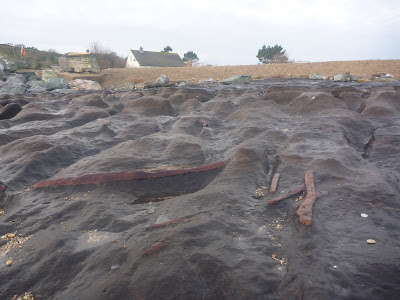 The peat as seen from below 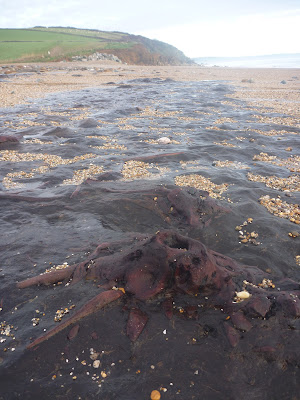 Tree stumps on the beach 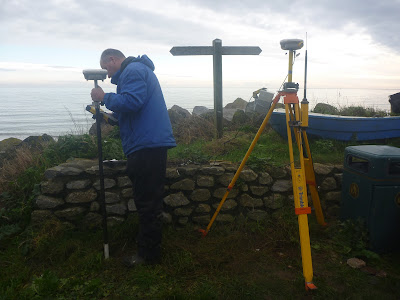 Roland faffs with the DGPS 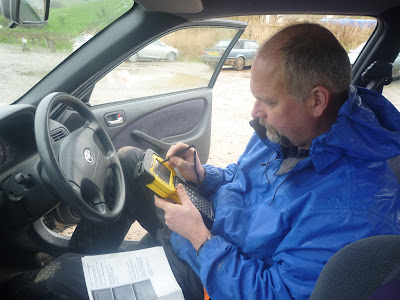 After having surveyed the peat in, Roland tries to get the data off the controller 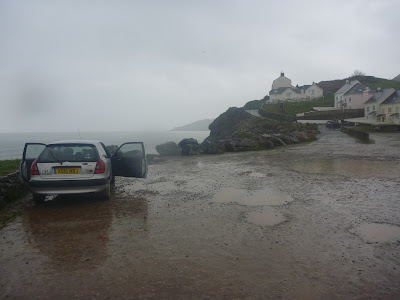 It looked a bit less picturesque when we were leaving!