A ceremony and a teaching qualification

The new academic year is again upon us. And tradition has it there is the annual teaching conference just before it. I like seeing if anyone has some nice bright teaching ideas, and I also like making sure the teaching boffins don't forget me. And this year I was hoping to get my teaching qualification at the conference dinner; that's the occasion for it, with smartly dressed people and glamour and all of that. I knew (since May) I had passed but I hadn't heard since; would I even get one at all this year? I tried to find out what was going on but those supposedly in the know shrouded themselves in vagaries. And just the day before I finally had got some concrete information: I wouldn't get it now. She didn't know when I would.

I listened to some presentations. The practical applicability this year wasn't all too high, but at least there was food for thought. Not so much food for the stomach, though; it was a multi-tasking day with the lunch break being consumed by an SOS meeting about teaching. We did get time to go and quickly grab some food, but I would have gone for more liquids, and perhaps seconds, if I had had time... at least the meeting contained good news. 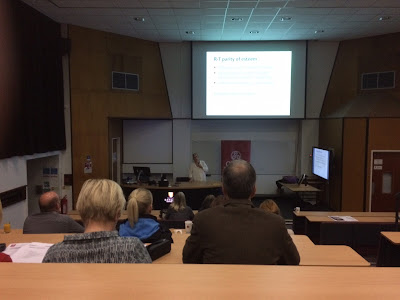 The keynote speaker in action

During the keynote lecture I was contacted by one of the underground men, who happens to be the person who prints the T-shirts for all the peer guides of the university. He had a second batch for me! The peer guides are on duty for an entire week, and wearing the same shirt for that amount of time, especially if nightclubs are a distinct possibility, can lead to interesting odours. I had failed to check that those who placed the order knew that. They didn't! Hence the late order. So that pulled me out of the conference again.

After the last plenary session I scampered to the main building, retrieved the original batch of T-shirts I had dropped off there, and took them to Pontio for a meeting with the peer guides. Nobody showed up. Oh dear. I texted a head peer guide; I was in the wrong building! Oh dear. And if you have enough T-shirts (I was carrying 56 polo shirts, and additional booklets, flyers, badges, and whatnot) it gets heavy! And where did I have to go to? The main building of course! But some peer guides approached me and helped me carry. Very sweet. And the meeting went well; the head peer guides have everything under control!

After the peer guide meeting I had some time before the dinner; I used it for drinking my body weight in water, and waxing my hair. I had washed it the night before, but then it should be waxed too; preferably before my two upcoming smart occasions. Then I was off to the venue. I biked up, went into the loos, and changed into a sparkly dress. I was ready! I immediately found my colleague Tom; the only other person from SOS that I knew would be there. We expected Lynda, a lady from geography, later. 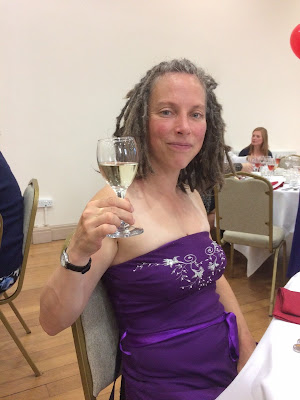 It was a nice dinner! I had the veggie option and the starter was excellent. I was less keen on the next two courses but the starter had been so big I couldn't finish these anyway. And I could drink as I had come on bike. And it was nice to catch up with Lynda and Tom, and to meet the lady (from psychology) on my left. She was with her boyfriend who was a historian; I had met him before at teaching-related events. And he was a Welsh speaker! That's always nice. 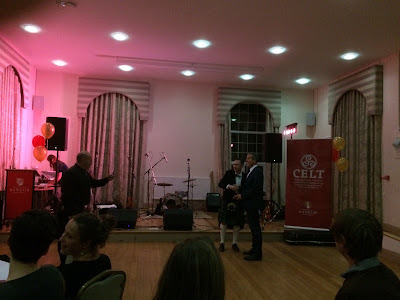 A man from learning technologies, who is always willing to help me if needed, gets an award

After dinner the awards were handed out. Tom and Lynda did get one (two completely different ones, but still). At least I got to cheer for them! And as I had a wedding the next day I left when the awards were done. I wanted to get a good night sleep for the upcoming long day!

When I got home I found an envelope on the doormat. I was curious. It looked a bit like a certificate. And bloody hell, it was. That was a bit of a bummer! They clearly had it ready. Why not give it to me at the ceremony? That is so much more memorable. But at least I have it now. Will be good when applying for jobs! 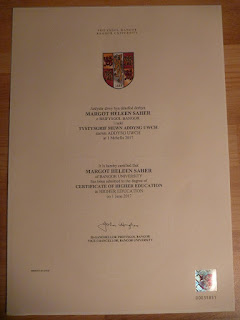