How was the project going? How many 14C samples were we expected to dig up? The higher echelons of the project wanted to have a meeting to figure out what the state of things was. And it was agreed to hold that meeting in Sheffield; Chris is based there, it is on route between Daventry and Edinburgh so Tom could easily stop off there on his way home from GeoTEK, and thus so could I (although it wasn't quite on route) and it's easily reached from Durham. But as I wouldn't spend the last day in Daventry I would be coming back from Bangor. I had a hasty Monday unloading cores, sampling cores, completing the lists of samples taken, plotting the samples on maps, etc etc, and then I was back in my van, on the way East. It was actually quite far!

I left at 8AM and reached Sheffield (not via my intended route) by 12. It was a bit nerve-racking; I was still in the enormous van, I have never been in Sheffield, both the signs and my satnav sent me off my intended route, I didn't fit inside the parking garage that had come recommended (van too high), so I had to on the fly find a parking spot in Sheffield City Centre with this heap of a vehicle. But I managed. 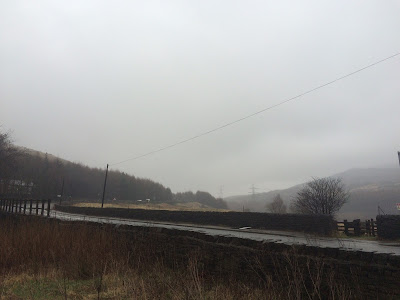 The rainy route to Sheffield; I stopped for a leak in the Peak District 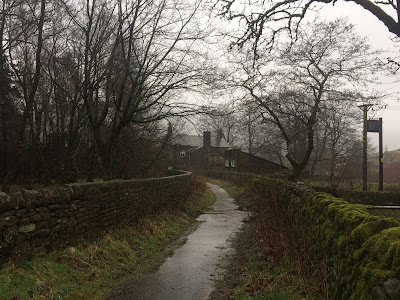 I don't often get such a view from a roadside loo!

I got there tired. But it was good to see everyone! And we could report back from our adventures in Daventry. And we thought of a few more samples to take to fill some gaps. And we discussed some problems we came across; in one area of the project, it looked like the glaciomarrine sediments were terribly reworked. We'd do some clever things with these to find out it that was the case.

Time flew. I had paid parking until 5PM, thinking that was massively exaggerated. But it wasn't! We were done just in time for me to get back to my van. I spend 20 minutes in traffic deadlock before I was out of town. This time I stuck to my intended route: over Snake Pass, and for a reason; it was beautiful! But I was only home close to 9PM. I decided to drop off the van right away. So after 9 I was finally definitively home. And still knackered! I would only have 1.5 days in the office to sort out what we had discussed, and then I would be on the road again...
Posted by Margot at 09:42