Going to Daventry just before my hike wasn't very convenient. And maybe celebrating getting out of my container by going underground and into the mountains in the weekend before leaving was a bit much. But I only have so much time left here, such opportunities are not to be sniffed at! But with a dash to Sheffield to complicate things I spent the run-up to the Norway trip tired and with a headache. Which important items will I turn out to have forgot?

I also wondered how to bring my luggage. We would have sleds, so it didn't need to come in a backpack. Maybe a duffel bag? These give easier access to the luggage. I decided to go for it, even though mine has nothing to make carrying it easy.

When I walked to work in the morning, luggage and all (I would leave for the airport after work) I chose to carry the bag on my head. It seemed the easiest option! And it attracted attention. Soon a car stopped and offered me a lift. So nice!

When I left for the bus station this did not happen, but once there, I recognised an MSc student I had once taught. He helped me with the bulky thing, and even helped me carry it to the ticket machine at the railway station! What a nice man. He even confessed he had walked into the wrong room that day I taught him; he was a marine biologist, specialising in jellyfish... nothing I have much to add to. 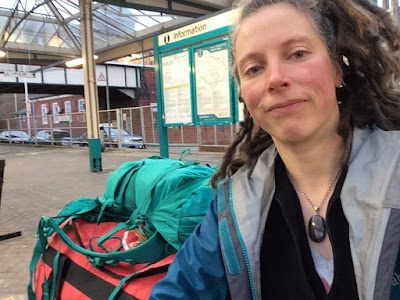 Made it to the station! 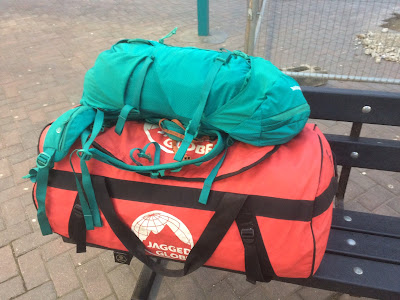 My rather heavy luggage

Getting to my hotel at the airport was a bit of a nightmare; it was undergoing maintenance or something, and many passages were blocked. I had no pound on me for a trolley. I had misinterpreted my notes and ended up at the wrong terminal. But I got there! And after a short night I was ready to check in. It will be nice when after eating all the food that bag will be lighter on the way back!
Anyway; some of the worst was over (travelling back will be a chore too) and soon the fun could begin!
Posted by Margot at 08:09