I had noticed lots of roadworks in my village last year. Yellow fences around holes in the tarmac everywhere! It seemed to be moving through town. And then I received a letter; the gas pipes would be replaced in the area, and that meant disruption. So that was what the works were about! They expected my house would be connected to the new system by mid January. But the yellow fences (which did a lot of falling over in the wind) edged closer only slowly. January came and went. February too. Then I went for my winter hike without any further news from the gas company. But when I got back the fences were in my street. The first morning I left the house to get to work one of the men addressed me. They had been knocking on my door to discuss the work with me! Well that's what you get if you don't announce the work in advance. They asked me to take my car off the driveway as they had to open it, and they said that on Thursday they would do the actual move over. I would have to let them into my house for the purpose. 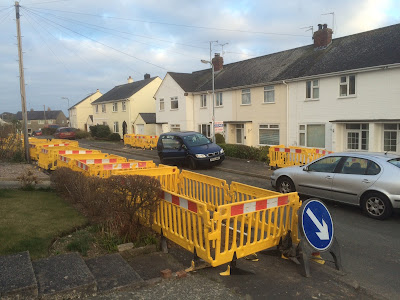 The next day I spoke with them again. Thursday had turned into Monday; typical. But at least it should be done in one day. Whether it had anything to do with the gas work or not; my boiler was having hiccups, so I already had disruptions. I had had to ask the landlord to hold back with dealing with this; the change-over would have to be done first.

So that Monday I awaited the call; I had given the men my number and they'd call me when they needed to get in. No call came. When I got home, I had a "we missed you" card on the doormat. Typical.

I phoned the number. The chap that answered offered to send a person right away, but I was about to go climbing, so I asked for an appointment the next morning instead. When I got home, what did I find? Another "we missed you" card on the doormat. Typical. I decided to talk to the men working on the street again the next morning. They reiterated they would phone me when they needed access. Yes that's what you said yesterday... and every day that passed was another day before easter durring which the boilder issue wouldn't be solved. I was getting impatient! I didn't feel like a 5 day bank holiday in the cold.

I waited until 2PM and then I phoned the utilities company again. That helped! A while later I was phone by a gas fitter who was 10 minutes away from my home. I jumped on my bike, and arrived at the same time. He reconnected my gas meter and checked my appliances. One look told him my boiler struggled with the economy mode it was in; boosting it up a bit immediately solved the problem. Not ideal, but at least I had heating (and a hot shower) again. Bring on Easter! 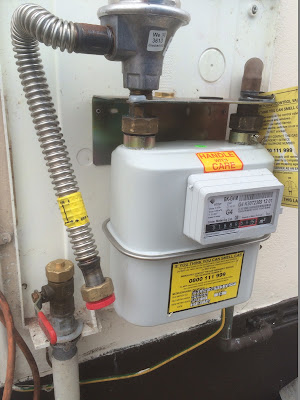 The unconnected meter
Posted by Margot at 20:20