Snow hike on skis: getting used to the equipment

Long, long before this blog was started some friends started to go on a hike together over Easter. Many years later they were up for a new challenge, and decided to go for a winter hike. The venue was the surroundings of Winterberg, Germany. It was a success! You can hike quite well on snowshoes. And if you bring enough clothes and fuel, the low temperatures are no problem. We tried the Vercors too. When I moved North, the snow hike came with me; our first northerly hike (I think) was on Senja. And with that the trend was set! Iceland followed, and Norway again, even though by that time I lived in the UK. I missed a few years and then caught up in Norway again. Then two years ago I was just changing jobs around the time of the usual winter hike, last year I was too busy teaching, but this year, I would be able to join this marvellous annual event again. So I did! And it was our trusted destination of Norway again. But something would be different: this time we would leave the (majority of the) snowshoes behind and do the honourable thing: go on skis. A first! For this group, that is.

I had ski'd with a sled before, on several-day trips (this one and its reprise), and of course I had done plenty of day trips on fjellski (I think they call them backcountry skis here) during my time in Norway. I know I'm terrible; I don't like speed or sliding, and I have floppy knees, but I know I will get from A to not too complicated B. If I can do this the other Dutch hikers can too! Several of them are pretty good on alpine skis, and we expected to do this trip on randonnee skis, which is almost the same. So I had faith! We would bring two pairs of snowshoes in case we would encounter obstacles we were not comfortable with in skis, or in case of ski breakage, but otherwise we would be committed. And we would not even touch these snowshoes!

When the time came I prepared (sort of) and got to Norway. There I met Thomas; he was the only other early arrival. I had realised I had forgot to bring all the water capacity I had intended to bring, and he mentioned a big outdoor shop a small bus ride away. Going on a small adventure is more fun than sitting on your bum on an airport! We went. They didn't have water bags with a tube, but they did have other water carriers, even discouted, so it was a success. Thomas himself went for a flask too!

When we got back the others were due. It would take a while before they appeared, but there was still time. We soon piled into the train for the 4 hour journey to Geilo. The train trundled through pretty, snowy landscapes. During the journey I had a sinking feeling; I would bring my DNT key, which gives access to unmanned Norwegian huts, but did I really pack it? I had packed more casually than ever before, and I had not checked my packing with the minutes of the meeting we had had. Oh dear. And we wouldn't have another one. Jitske said she'd discuss with the mountain guides we'd have with us the first two days. Maybe they had access to one? For now we'd better just enjoy the trip. 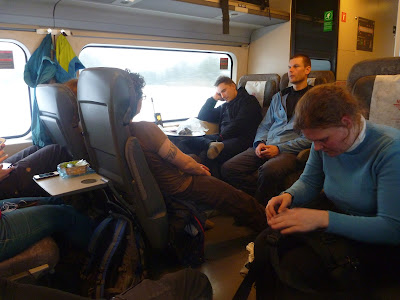 On the way to Geilo
In Geilo we were picked up by a small bus and taken to the youth hostel. Youth hostels aren't what they used to be; we had two serious apartments there. We distributed ourselves over them. Ours had three spare beds; we had plenty of room! Although one wonders what sort of queues for the bathroom you get if you have all the beds full. There was the one...

After some brief unpacking we went for dinner in the hostel's facilities and pitched our rented tents. We had received them at the airport and this was the earliest we could pitch them! The tipi for cooking provided some challenges but mainly because the snow on the premises wasn't deep enough for our snow pegs. After our well-meaning attempts it was time for bed. 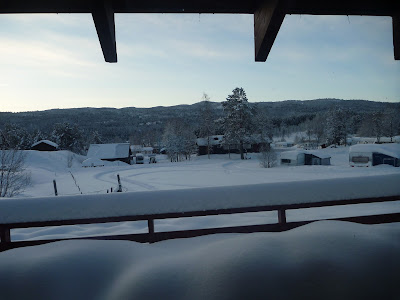 The next day we had a calm start; the youth hostel did not serve breakfast until 8.30. After said meal we got our bags and went to the ski rental place to get our kit. Jitske, who had organised this trip, had promised us randonnee skis, but we got fjellski. Quite a different cup of tea! More in line with Norwegian habits; no Norwegian would use randonnee skis for modest terrain as we would have, but it did mean much less control. Oh well.

It took me a while to get a good pair of shoes as it's always hard to find a pair of shoes that fit both my feet and my orthopedic soles, but I got one in the end. And with our kit we went to the start of one of the prepared tracks of which Geilo has many. Time to get used to these bits of wood, plastic and metal that would be our mode of transport! I left the pulk behind; I knew what fjellski are like and was keener to try to ski not just with a pulk (luggage sled), but with a pulk that was fixed to me with a rope rather than with a frame; however, the guides advised against it. 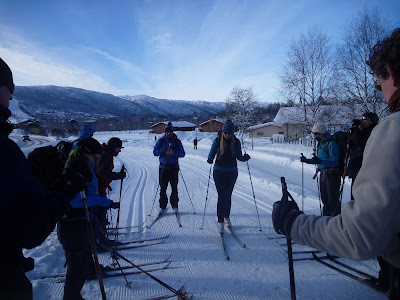 The guides introduce us to the skis

We put the skins on we'd be using. I had only used full skins; half ones would leave more glide. We set off! It was a nice day and we were nice people but soon I was a bit unchallenged; I was on skis with skins on a prepared track around a lake! There was no learning there, nor challenge, nor play. I took them off. And not an awful lot later the others were told to do the same! Now it got more interesting. The others were introduced to herring-boning up (not something you learn on a ski slope) and descending on the floppy long skis. Many Dutch bottoms descended onto the snow, and many skis ended up waving in the air! It reminded me strongly of my own first attempts. A first blister was also taped. But skills were learned and fun was had and all was well. 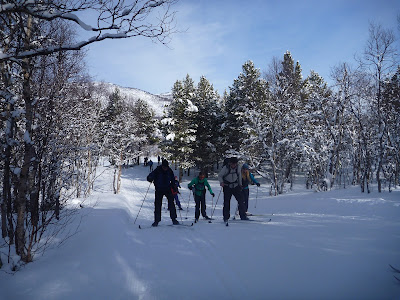 We sat down somewhere in the snow for our sunny lunch. Life was good! And then we moved on. I found out both our guides were British, although Carl lived locally and Hannah in Salt Lake City. Carl had even worked at Plas-y-Brenin, half an hour from where I live, for years! Small world. They mentioned, as well, that the unmanned hut we intended to visit would also be accessible without key. Good!

During the afternoon the weather got cloudier and the people got tired, so when we got close to town again it was none too early. Some people wanted to get back to the ski rental place; some people had shoes that turned out to be too big and poles that were too long. It was quickly sorted! Then we could go home, and get ready for the next day's departure. Five of us had dinner there; I festooned it with some Penderyn whisky I had brought. It was universally appreciated!

The next day we packed our pulks, which was easy; the rental specimens came with a bag that was big enough to hold the most ambitious amount of luggage. Just chuck it in, strap the bag in, and done! We then had a last breakfast in luxury, and off we were to the start of our trek. It was all uphill, and further than we had figured, and the weather wasn't too nice, so it was a trying start, but we got there. At the bottom of a local ski slope, where a winter route heading west started as well, we teamed up with our guides again. It was time to take the wax off our skis, glue the skins back on, and set off! 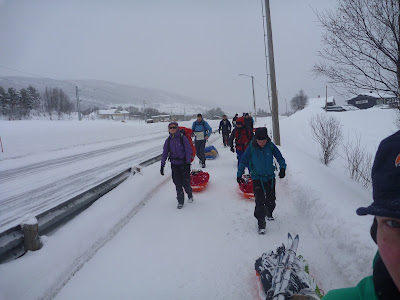 Walking our pulks to the starting point 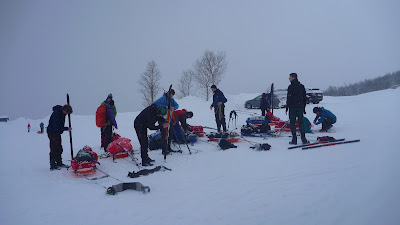 We had the kit, had got to know our skis, had sorted our accommodation issues, and had had two good nights of sleep (I had, anyway). The real adventure was to start!
Posted by Margot at 13:06