Productive rendez-vous with the Cornish

Everyone comes to North Wales! It's just THAT beautiful. Last year two of the Cornishmen came up, and I took them through a mine they didn't know yet. And this year they came again! And a similar thing happened. I wasn't going to be very well-prepared; I had come home the evening before close to 10PM. I was knackered. I suggested we don't meet up too early...

At 11AM we met up near a mine. This time there were three! Like last year Darryll and Mike showed up, but this time they had Dan with them. They are spiffing men. It was good to see them again. But we didn't waste time; we went to the parking place and got kitted up. The mine I had had in mind was somewhere up the hill; fine for Daz and Mike but Dan struggled. Before we got to the entrance he gave up. Oh dear!

The thre eof us went in. I realised I didn't have a camera with me. Oh well. We'd be faster this way! I do roughly know my way around down there. We had to do a bit of searching for the bits I wanted to show them. But I showed them all the good bits I knew of, and some bits I hadn't seen before myself. We moved fast so we saw the length and width of the place! And a nice place it is. I saw a pendent ladder I had only seen the first time I had been down here. And I squeezed through a collapse I had never been through! Exciting times.

We even broke the spell of one of the mysteries of the place; we had stumbled upon a ladderway down, but the top ladder, which was a bit awkward to get to, had only a very small number of rungs left. We didn't want to akwardly get to it only to crash straight through it. We were thinking of rigging a rope and seeing where it went to. We had never got round to it...

This time we were on the lower level; somewhere in a remote part we saw a ladder. It looked like you could climb up to it! So I did. And it went. I recognised our near-rungless ladder! We had found the other side! And said ladder wasn't as frail as it looked; we got up it! So now we've done it. Spiffing! 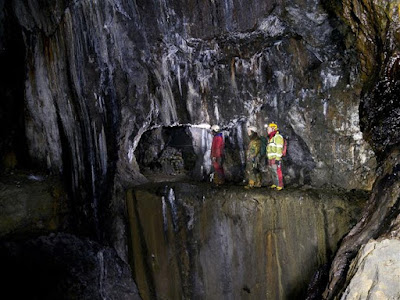 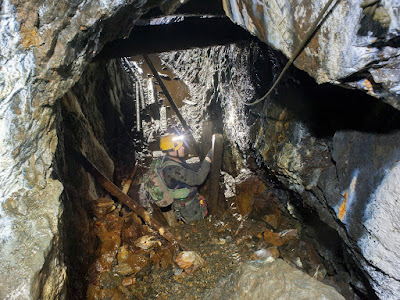 When we had done that we had seen pretty much all of it. We decided to go out and look for Dan! We found him near the cars. He hadn't been bored. Good!

We went to Betws-y-Coed, where the men had rented an apartment, so we could have a cup of tea. I pointed a few more mines out they may not know. It was a snug afternoon! But I was all too aware of what was both behind and in front of me, so I didn't stay exceptionally long. I had to get home, get some food, and get ready for the Sunday and, hopefully, for the upcoming trip too. And do some stuff I had not gone around to in the previous busy days.

I don't know if I'll still be living here the next time they come up. I hope I do!
Posted by Margot at 05:44