"I saw that movie, and it put me off caving forever!" That was the review of the film "Sanctum" by one of my friends. I had borrowed it from another friend. And I can see why it doesn't do much for the popularity of caving and cave diving! And at the beginning it even says "based on a true story".

So what was my verdict? Well let's start with a small synopsis for those who haven't seen it, and don't intend to. Take that as a spoiler alert!
The movie is about a bunch of cave divers who are exploring a big cave in Papua New Guinea.  At some point they start bringing newbie sons and girlfriends in. They explain in the beginning the cave is 2km deep, and they haven't yet found where it drains into the ocean, which it undoubtedly does. And on the day the film starts, the newcomers go down, while a storm is forecast. While the newbies are received at the forward camp, two of the divers find a new passage, which looks promising, but something goes wrong and one of them dies. 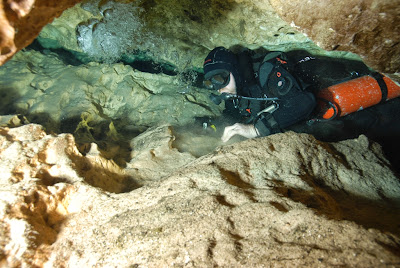 Then the storm hits, and the cave starts flooding. They try to go out the way they had come in, but there's too much water coming down, and a few already die trying. They then decide to try to cave-dive their way out, and go through the passage found earlier. And along the way one dies after the other. The three last survivors are the veteran cave explorer, his 17-year old son, and some chap. Of course the boy and his dad get a lot closer before the third guy wants all the food, light and diving equipment and kills the dad. He then feels remorse, leaves without diving kit, and drowns too. The boy finds the exit and survives.

So what did I think of it? I found the whole father-and-son bollocks a bit boring. I was in it for the caving! And it's fun to watch just for that reason. And the best fun is picking on stuff you think you know better. To list a few:

*They bring newbies into a 2km deep cave. Yeah right!

*The entrance pitch is several hundred metres deep, and they have rigged it just with ropes hanging over the rocky edge. If you do that, your rope has worn through before you are halfway down. And if someone or something dislodges a rock you are right in its path; a helmet will not protect you from a rock that has been gaining speed for five seconds. 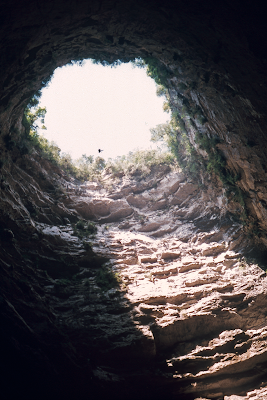 A caver abseiling down the pitch that they use as the entrance pit in the film, although this one is in Mexico. You can see the caver (black speck) hangs away from the edge, to avoid rope rub.

*When they abseil down, they just jump, hands in the air. I can't imagine anybody doing that. They descend on racks; they have no stopping mechanism, so if you jump and descend rather rapidly you probably gain too much speed and crash. When they come down they are completely stable; mind you, they came down a very long rope, and even if they're static (they would be) you expect them to bounce like nothing on earth when you change speed.

*All cavers wear a Petzl Duo as a headlight, attached to their helmet by straps. It's the most basic and unassuming caving light there is. If you're doing a serious expedition in a cave with large spaces, you make sure you have a stronger light. And you screw it to your helmet! Firstly: straps snag, and secondly; they come off. You don't want your lamp to fall off mid-pitch.

*A girl video-tapes an interview with the boy, while he has his headlight on. You wouldn't see a thing.

*A girl tries to prussick out of a pitch, which doesn't work because of a) a waterfall coming down on her b) the rock the rope is attached to coming down. But when she's struggling in the waterfall you see she is tied into the rope, rather than prussicking along it.

*A guy falls, and is seriously hurt. A guy attend to him, and shouts at the others he is just going to kill him, because he is beyond hope anyway. Maybe someone would do that, but it's against all casualty care rules, and also plain unfriendly. The shouting about it, I mean; the improvised euthanasia is probably defendable, although not to a judge. But the executer doesn't survive the movie anyway, so he wouldn't care.

*A girl descends a rope, and gets her hair caught in her descender. This is very realistic; everybody with long hair who regularly abseils has been there. (Even funnier are the stories of men getting their beard stuck in their ascenders.) But they turn it into a drama; she screams her lungs out, takes her helmet off, rips half her scalp off, and then she decides to cut herself loose. And she doesn't use any force, but accidentally cuts through the rope she's hanging from. Yeah right!

*The team runs out of light. Not strange, seeing that they are regularly filmed with both their normal and their spare light on. If you are trying to get out and don't know how long it will take, you are a bit more conservative with your light. And you would NOT go underground in a place like that with enough battery power to last you for, say, 100 hours.

*At some point, the boy and his dad see daylight, but don't realise it for minutes. Then the boy has a brainwave; "dad, I can see you!" Believe me; after only hours underground you notice when you see daylight.

And after all that I was curious what the original story had been, so I googled a bit. It is very, VERY loosely based on a story! The inspiration came from an expedition in Australia, which went pear-shaped when a storm broke loose and triggered landslides that blocked the entrance. Two cavers got out in time, and the rest had to stay put for a while as a surface team dug them out. All survived. A much better story, really!
Posted by Margot at 12:19