“Are you still interested in Dutch literature?” I said yes. I don’t tend to have (make?) time to actually enjoy any; if I read it tends to be the newspaper. But she offered me “dit zijn de namen” van Tommy Wieringa. And I happily accepted. 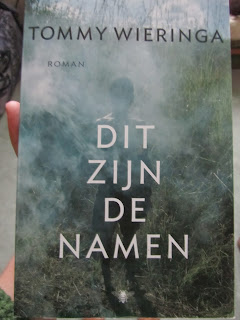 When I got home after a train ride, a wait at the airport, and a flight I had almost finished it. It was a page-turner indeed! Set in some former Soviet state, it follows a group of people who have paid smugglers to get them across the border, and the policeman in whose town they end up at the end of their travels. Wieringa convincingly portrays both the makeshift group of wanderers and the somewhat resigned copper. I liked the changing moods within the group; as long as you are relatively healthy you make the group stronger and you’re welcome; get weak and you’re on your own.

Beside the issues of illegal migration and power in a corrupt society, the book also deals with identity and religion. I quite liked it! And both my mother and me like sharing; if someone wants to read it I’ll happily send it to them, on the condition they either send it on to my mother, or onto someone else who will send it on to my mother instead!
Posted by Margot at 14:31