I thought it was a Norwegian thing; if you want to piss someone off, park on their land, Or near their land, Or nowhere near their land. Whatever you do; if you park, you always seem to end up pissing someone off. It makes me sad. But it might actually be universal. In Plymouth nobody moaned about me parking anywhere, but instead the car got vandalized repeatedly (like this time); not really an improvement.

When I started digging on the Moors I had to go to work by car once a week. If I would first bike home and then go north it would take too long. And that meant parking on campus. That worked fine; it's not cheap (£6) but the parking lot is right next to my building.

And then term started. No bloody way you can park there unless you're very early! And I tend not to; caving requires some preparations. So where to park then? Matt had suggested I park in the residential area just north of University. He's lived in Yorkshire long enough to have an eye for a good deal! And the daft thing is: there's always space. In the beginning I sometimes tried the parking lot next door, but I gave up on that. No chance. And there is another parking lot a bit further north, and that tends to have space, but that's almost as far as the residential street.

I feel a bit bad about parking in someone's street, but there never seems to be a space issue, and it wasn't me who made parking free in such a tempting area. If the residents suffer from university-related parkers, which is not unlikely, they should convince the city council to make it a permitholders-only area. I decided to go halfway; park on campus one week, and park in the residential street the next week. Saves me money, saves the residents a rogue car. All happy!

Not all happy. One day I got into my car and saw a note under the windscreen wipers. Whether I could refrain from parking there. 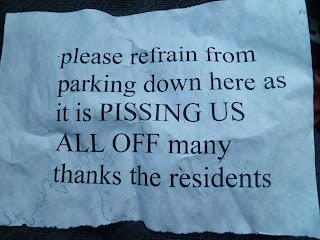 If it had said "please refrain from parking here, it hinders us residents" I would have been happy to never come back. But I PISS THEM OFF? In capitals? That's very rude. I wondered if I should park there next time too, with a sign under my windscreen saying "what happened to asking nicely?" But I suppose people who write such angry notes at strangers in the first place won't seize such an opportunity to see the error in their ways and resolve the question politely, after which everybody happily goes their own way. I suppose I would meet with utter hostility. And do I actually WANT to piss them off? Of course not. And it was the "many thanks" that inspired me to decide to just take the rudeness on the chin, and park on campus from now on. Is this satisfactory? No. Is it fair? I think I got this treatment because my car is so conspicuous. Had I had a silver VW Golf from 2008 I doubt if I would have received that note. What do I hope happens next? That other cars park there to the annoyance of the residents, as many as it takes for them to do the honourable thing and resolve this the official way. Do they want the street for themselves? Make it happen!
Posted by Margot at 21:50