I could have known it wouldn't last. For years, I had endured the quirks of an elderly boiler, until things got too much for me and I pestered the landlord so hard they replaced it. And it worked! It worked like a dream! And it even had a timer; if I had an idea of what time I'd come home, I would have the timer turn the heating on half an hour in advance. Really nice! But then one day, during the longest bank holiday of the coldest UK March since 1962, I came home, and the heating wasn't on. Didn't want to get on. Oh dear!

I decided to have a look if I could trouble-shoot it. It wasn't immediately clear to me what the problem was. The boiler has a little window where it displays messages, but for some reason, it was installed so high above the ground I have to climb on top of the sink in order to see what it says. But that can be done; I saw it was a water pressure issue. So I brought out the user's manual. And it explained how one re-pressurizes the thing. I was a bit apprehensive; boilers involve hot water, water under pressure, gas, AND electricity - and I hadn't forgotten that my previous boiler seemed to have 240V running through exposed surfaces. So many things that can go wrong! 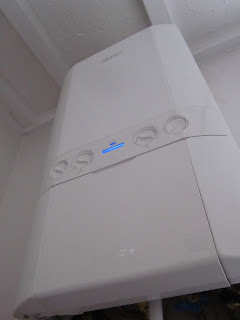 The boiler as I see it - not easy to see the messages on the small blue screen! 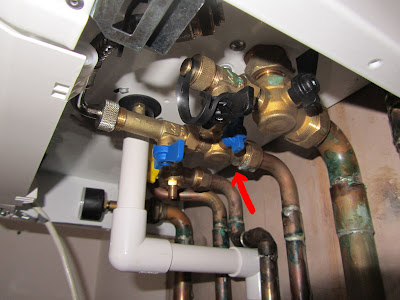 The boiler's underbelly. Notice the diagnostic droplet, indicated by the arrow! I suppose that's the leak.

Much can go wrong, but nothing did! The manual did its work, and I managed to connect the re-pressurizing-loop (or whatever it's called), and hop! The machine came back to life. While faffing with all the pipes and valves in the apparatus' underbelly I also diagnosed the cause: one of the pipes was leaking. That must be the culprit! After Easter I'll phone the landlord again. But for now I'll enjoy my resurrected heating. Nice and snug! 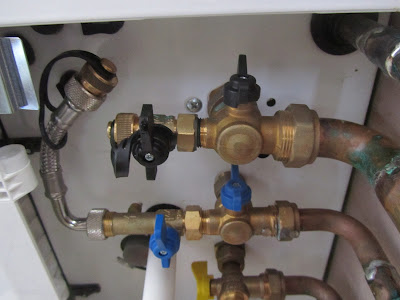 The re-pressurizing loop. Never heard of those! But it evidently works...