We weren't exploring Rick! But with a small group of mine explorers we seem to have acquired a new habit: go to places that Rick has had on his wish list for a while, and check them out. (We did that here and here.) And this trip was one in that sequence.

This time the venue of choice was a bit remote; we walked quite a way along the Tamar, and then clambered into a small valley draining into it. And sure enough, above the stream was a very conspicuous, rectangular hole. That would be the one! We even found a bolt hole. Only one. I put a bolt in, and then Rick asked "you have a spanner, don't you?" and I didn't. I used to have a spanner standard in my SRT kit, but it had vanished. And a previous trip, Dave had realised he hadn't brought one when he was picking me up, so I had run back in to get one. But that one wasn't meant for caving purposes. So I hadn't brought it this time! And nobody had asked me to bring anything. There was slight panic. Luckily one can use maillons as improvised spanners. And even better: Finbar, who had been lagging behind, turned out to have a real one with him! That was a bit of a relief. But to be sure we drilled an extra hole. Then Lionel rigged it, and down he was. 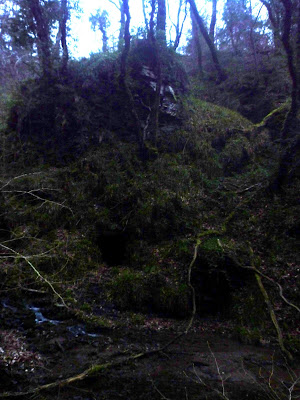 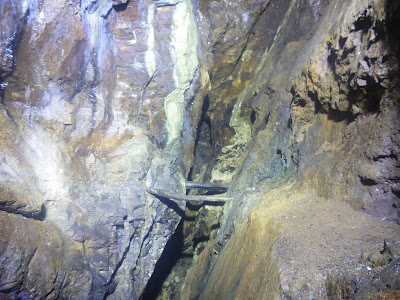 What we saw from the ridge from which we rigged it

I was the last to come down. I heard Lionel mention water down there. Water! My favourite.

When I was down myself I saw the place wasn't big. It was a stope with collapses on both sides. And a flooded winze some two metres to the side. By the time I had explored the stope, Lionel had figured out a way to look what's on the other side of the winze without getting wet. You tie into the rope, and then wedge yourself in the passage that leads to the winze; high up it was narrow enough for that, and you could just see around the corner. It didn't go far. But I still didn't think it was satisfying to only see it from such a distance. So I ask if the men minded if I had a look anyway; I would just clamber around the corner, hanging from the rope. As you needed enough slack on the rope to make it across it meant it was so slack you would get wet up to the underwear, but hey, what's a little dampness among friends. And it worked. 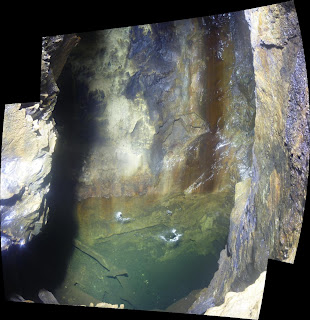 A composite picture of the winze. I made it a bit less clear by plunging in... 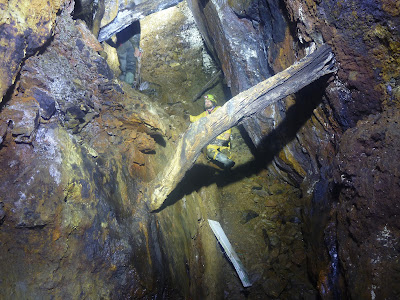 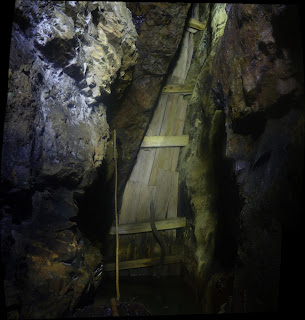 When Lionel saw me depart he couldn't stay behind. He tarzanned across a bit more energetically, so he hardly got wet. And then Rick wanted to try it too. As there wasn't much to hold on to once you landed on the far side of the winze, it worked best if someone caught you; that's how I pulled Lionel in, and he returned the favour to Rick. The level of intimacy this move involved was a bit high by Rick's standards, but once he saw the pretty little level he figured it had been worth it. And after we'd all seen what there was to see, we came back. This way the trick was to wedge yourself as far as possible into the winze, hold on to the rope as high as possible, and them swing to the other side. We all made it without touching the water! And then we went out. 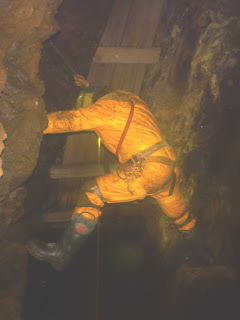 Rick wedged above the water, ready to swing over 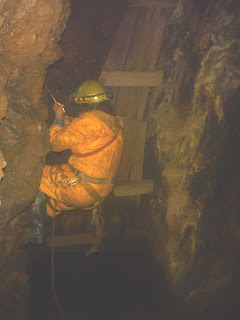 We were still in time for the pub. When I walked in I was greeted by a charming border collie. And that wasn't all; soon a very handsome cat appeared too! He was up for some petting and some playing! Another spiffing night out! 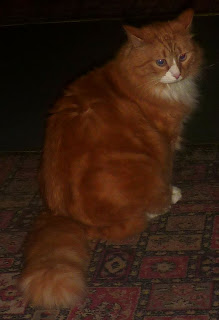 The handsome cat in the pub
Posted by Margot at 16:12