Bedford United to the end!

This time, probably the last time I'll ever be there, we did the honourable thing: we'd go even further. We wanted to first find out if we could get in through a higher adit, so we climbed up the hill. A quick, though wet, exploration taught us we couldn't. Oh well. Now we know! So we just trundled down the slope to the conventional entrance. We went in with five of us, and I ended up rigging the winze with the ladder over it, with Dave. A good start! Then I managed to do the freeclimb behind it without help. And did some of the rigging of the winze further on. I like that! And that way I was the first to drop it. And as soon as I approached the bottom I noticed that the water level was low. Interesting! 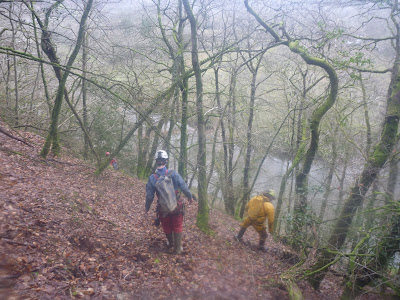 Getting to the entrance from above

While Richard was coming down I had a quick look in the direction we wouldn't go in. Often it is flooded! It wasn't this time. I went back to announce I was going to have a good look. And I did; it took water up to the chest, but I got all the way back to the laddered winze! That was nice; you could see the pale daylight on the ladder. Then I turned back. And at the wonky ladder I caught up with the rest.

We would go to the noisy shaft (it's noisy because of a waterfall running down it), and then have a look at North lode. That's some murky tunnel with deep ochre, nice dripstones and not very much oxygen. Well worth the detour, though! 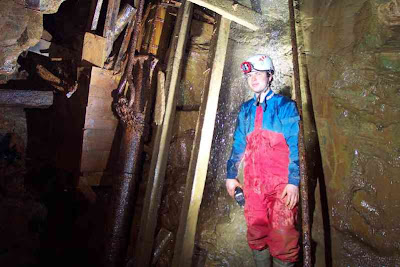 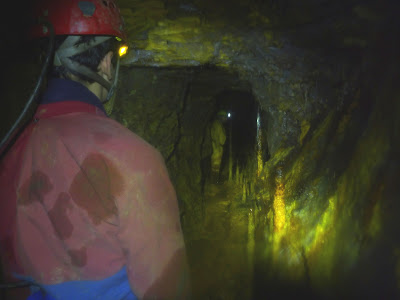 Richard and Rick in North lode

After the North Lode we split up. Rick had other engagements and Dave wasn't up for climbing the waterfall, but Richard, Alex and me would push on. Alex hadn't been here before, and there was a lot of fun to be had! So we stormed through the place. before I knew it, we had reached the winze with the plank and the rails. I didn't even recognize it as the place we had shirked from the previous time! This time we just crossed. Without issues. And then we reached the end. So that was all! I was glad to have seen the full extend of it, although I had expected it to last a bit longer.

When we got back there was one more bonus: some crawl, with tens of bats hanging just above it. they didn't seem to mind me, so I just quietly crawled underneath them. Not one flew up! Their little faces were only inches away. Quite special. And then we were out. That's another ticked box! I've been to the end of Bedford UTD; one tick closer to being able to leave the county in peace...

The Tamar flowing decoratively below