I had expected a warm welcome, but the cufflinks were a surprise. I had made my way from Plymouth to Helsinki to visit my sister; she and her husband picked me up from the airport. And when we got to the car I saw that her trusted toy orang-utan was there too. In his smartest outfit!

That first evening was short, but the next day there was time for more exploration. Some earlier visit we had taken a stroll through the outskirts of Helsinki, and eaten some cake in a very twee Finnish wooden tea house with a view onto the sea. We would do something like that again. We picked a different tea house, but it was equally cute and atmospheric. 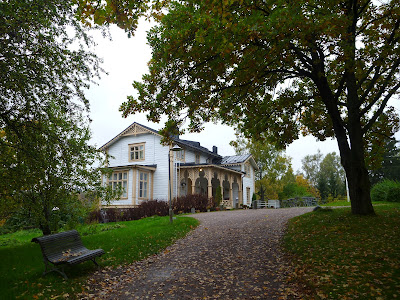 While strolling around I had an idea. I wanted a “my first book” in Finnish; one of those that has pictures of various items and then the accompanying word with it. My sister always teaches me Finnish words, but she often has to teach me several times, as I forget in between. With such a book as a reminder I might retain a bit more. We pondered this possibility, but changed the practical execution of it; we bought a notebook with blank pages instead. We would make our own! 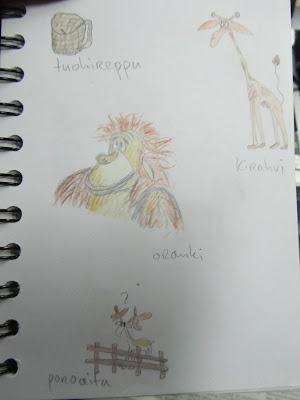 A page from the dictionary – page three, to be precise. Coincidence?

Later that day, after Antero had returned from work, we packed our stuff, did some grocery shopping, and headed for Karjalohja. Friends of Marieke and Antero had a sort of cottage there; it had actually been the house of the guy’s grandfather, which he had built himself, but which was now only in use for leisure purposes. Every autumn a group of friends gathered there for a weekend, and this time I was welcome too. Of course, the orang-utan had come along. 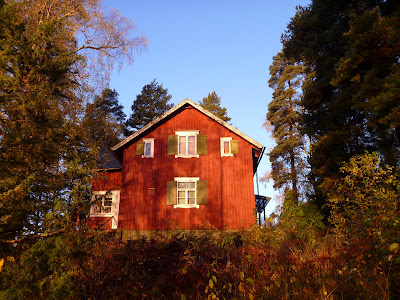 The house in Karjalohja, bathing in morning sun

It was quite the place! A stately home at a calm lake in a forest, at the end of a dirt track. Of course there was a small wooden sauna next to the house. We were greeted by the owners, their dog, and another visitor. We dropped our bags, changed into woods-resistant clothes, and tried to find some mushrooms before it got too dark. We found a handful. It would get easier the next day, with proper light! 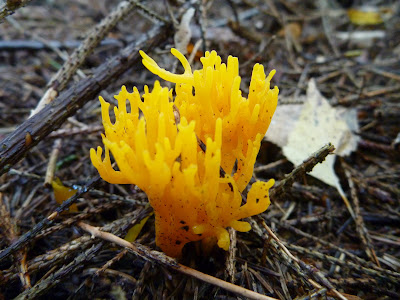 A mushroom we didn’t pick. It was willing to pose, though!

The evening was for cooking, drinking beer, making entries for my dictionary-in-the-making, and of course for sauna. I think I have tried a continental sauna twice or so; it tends to boil down to sitting in some ikea interior, and having a cold shower in some tiled bathroom when you get hot. Big deal! But this was a proper little log cabin, and when you got hot you walked out and plunged into the lake. Lovely!

After sauna and dinner Antero and Tommi, whose house it was, convened at the piano for some Schubert. All friends that gathered here knew each other through various choirs they had been singing in (including a choir for lawyers!), so a musical approach was to be expected. But after some schöne Müllerin it was bed time.

The next day I thought I heard my sister get up. I thought to seize the day, so I got up too. Only then I noticed the sounds I had heard were only that of someone visiting the loo. Oh well! It was a beautiful morning. I went outside; Tipsu, the dog, seemed to think that was a spiffing idea. I let her out, as she has a robust reputation for being obedient so I figured she wouldn’t run away from me. She waited patiently while I took some pictures at the lake side, but it was clear that where she really wanted to go was up the road. I obliged. We had a nice morning stroll! 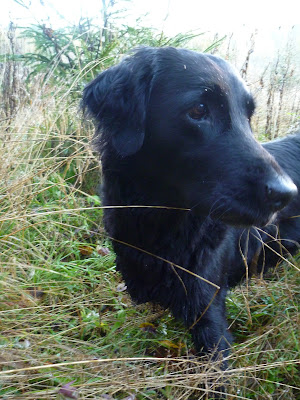 Back at the house I had a look through the window if anything stirred already. I saw nothing, but I did hear something; it turned out to be Anssi, the other visitor. He was also keen on some morning pictures. 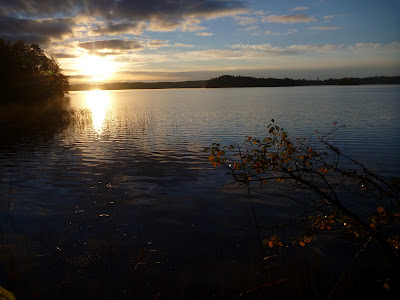 The lake on which shores the house was built

Walking back from the lake I found some of the mushrooms I had learned to recognise the day before; the funnel chantarells (Craterellus tubaeformis, for the nitpickers). Just when I had my hands full Anssi turned up again, with a basket. I happily handed over my swag, and followed him into the woods, looking for black trumpets. I had no idea what these looked like; I just looked for black mushrooms. When I found one he said it wasn’t a black trumpet (though it sure was black), but some species that grows on pine cones; he dug out the cone to show me. We found no trumpets, though we did find many funnel chantarells. But then we wanted coffee. 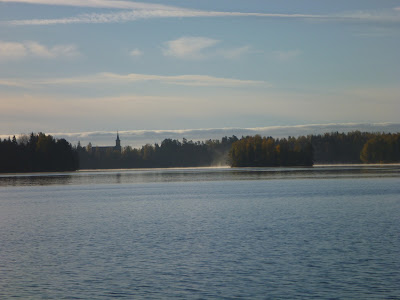 The church (of Karjalohja?) at the other side of the lake

After breakfast the mushroom hunting got serious. We resumed the hunt for black trumpets (Craterellus cornucopioides), and chantarells (Cantharellus cibarius), and we didn’t say no to the much more ubiquitous funnel chantarells. This time we were successful! Within no time we had our baskets full. We could go back to the house and spread our trophies out on the table to dry, and then go back. Or we could off-load into Anssi’s basket! That we did. 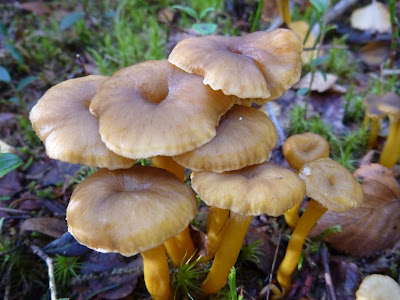 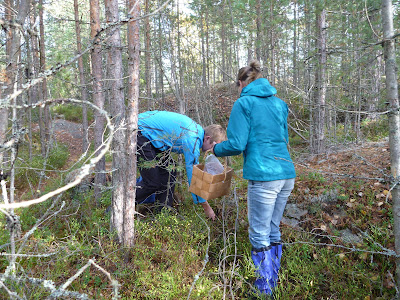 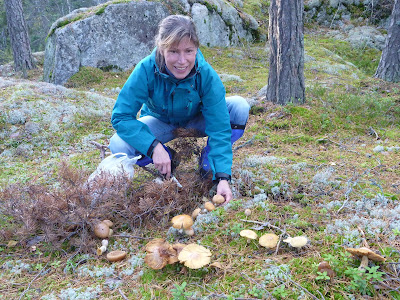 My sister with some mushrooms we left alone

At the end of the day I had independently found all three species we were looking for and I was quite proud of myself. I even had had the chance of showing off my knowledge of the mushroom growing on pine cones. And, of course, tottering around in the woods allows for lots of sisterly catching up. It’s nice to be able to just talk, for hours! Normally we communicate by snail mail, which is great, but it’s also nice to be able to exchange thoughts a bit quicker for a change. 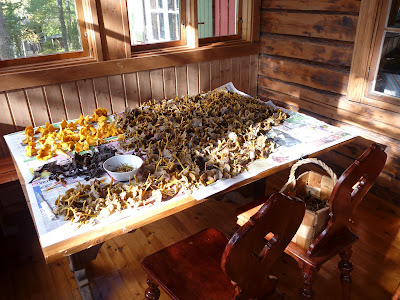 The harvest spread out on the table

It was time for lunch, which was a serious matter, with game sausages and (self-picked, of course) mushroom sauce. As it had depleted some key ingredients for dinner, Marieke and I ventured to town. It was an hour’s walk, but we insisted on walking, as we were keen on some more serious exercise than scurrying around the woods. And we had plenty to discuss! 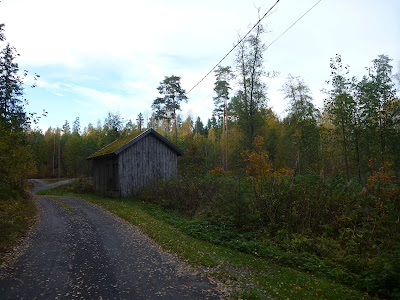 On the way to town

The evening was like the previous; food, wine, sauna (this time with jumping into the lake under a starry sky! Magical), some dictionary entries, some Schubert, and then bed.

The next day we wanted to drive back via Nuuksio national park, simply to see more woods and more mushrooms. It’s where Marieke goes to get her fresh air, and shows off on Facebook; I was keen on seeing it for myself. It is absolutely beautiful! And the evening was for cleaning all the mushrooms we had brought. We wanted to dry them so I could take them home; the drying, though, turned out to be either too slow for me to take them, or so rapid the mushrooms couldn’t cope, so I got mushrooms Marieke had picked and dried earlier. A good second best! 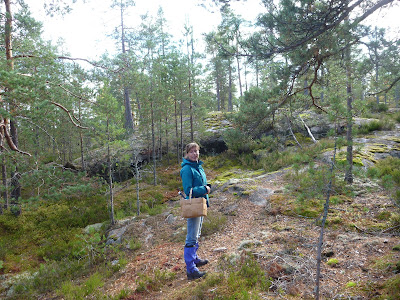 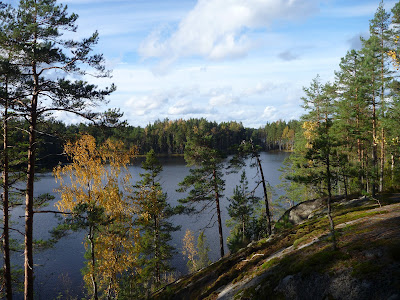 Nuuksio is riddled with lakes, of course. 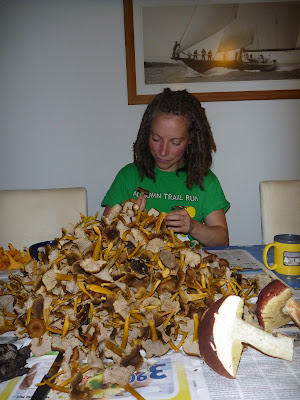 
The next morning already was the last. I packed and made sandwiches, and allowed my sister to indulge in what she had been desiring for years: pruning my eyebrows. And then it was time to take the bus to work (for her) and the airport (for me). But she thought she should take inspiration from my recent change to more frequent family visits. Maybe she’ll come see me in the UK quite soon! We won’t have problems coming up with hours’ worth of topics for discussion. And in the meantime, the postal services will keep the fire burning. ﻿
Posted by Margot at 08:19