Theoretically, it could happen that there is a big mining disaster (let's face it, a large cave disaster in the southwest is much less likely) somewhere quite far from where DCRO is concentrated (but still within our area), and that they want a batch of people and equipment to arrive on the scene quickly. In that case, the RAF could fly some of us out there. And the helicopter may not be able to land on site; we need to be able to cope being winched out. And most of us are quite happy with dangling from a rope, but few of us are familiar with dangling from nothing more than a loop under our arms. So that was something that we should work on. 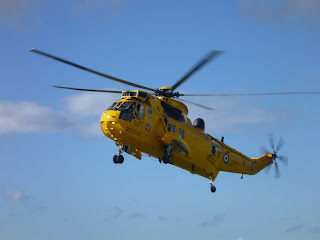 Of course I volunteered for a helicopter practice. Yes these things burn enormous amounts of fuel per minute, but hey, sometimes can be excused for jumping to an exceptional, though environmentally-unfriendly occasion. So obediently I read the RAF "working with search & rescue helicopters" handout, and on the day itself got up really early to get to the air base.

We were warmly welcomed, and were briefed on the do's and don'ts. We would be winched into, rather than out of, the helicopters. That way they didn't have to worry about us twisting an ankle upon touching ground, but got us acquainted with the winch anyway. And then, if we would ever have to be deployed by helicopter, they would just have to hope for the best regarding our landing.

We also signed some documents on that we were physically fit to fly, and had understood the briefing, and then we were ready for the first batch. Which included me! 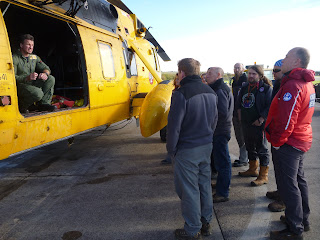 We put in the earplugs we had been handed out. And as the helicopter took off we were glad for that. A RAF chap walked us to near the helicopter; blimey, it indeed takes quite some effort to stay upright in the draft! And the guy gestured at the first two people; one of them was me. The other one was one of our veteran members (he got a medal, a few months ago!). We got into the strops, and up we went! No time for pictures. And just a strop under your arms actually feels perfectly secure. I suppose they wouldn't use them, otherwise... Once inside, we were gestured to the two seats in the back of the aircraft; the observer seats, next to concave windows that indeed provide a good view. 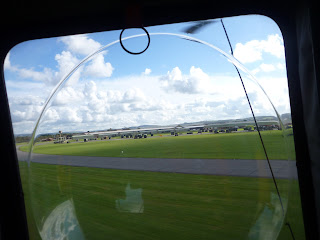 The airfield seen from the helicopter 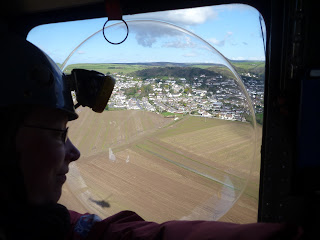 Me and my humble shadow!

Minutes later the other two couples were winched in. And off we went, for a little bonus flight, over the north Devon coast! Very nice. 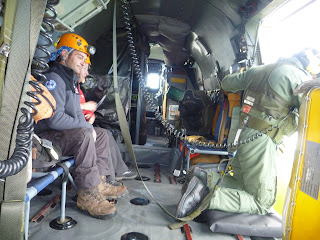 The next two have been winched in too, and the last two are on their way 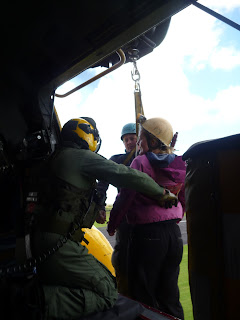 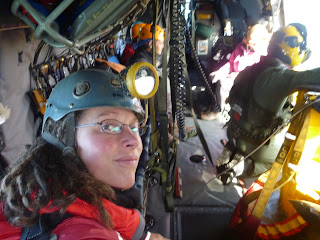 All inside, and flying!

Once back at the airfield we were ushered out again; all non-verbally, of course, because of engines, rotors and earplugs. And then the helicopter went into a low hover for the second batch. Altogether I think only for half an hour the helicopter was airborne for us, but for most of us this was the most helicopter experience we ever had! And we all loved it. A lot of driving for little flying, but I think all of us would do it again, given the chance! 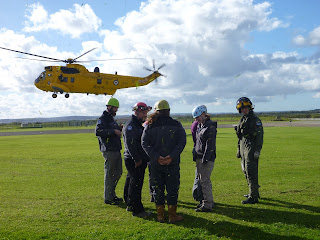 The next batch gets ready. Notice the distance to the helicopter, and the grass flying around! 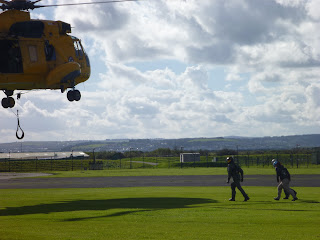 That's how you approach a helicopter - with difficulty! Notice the strops already being lowered. 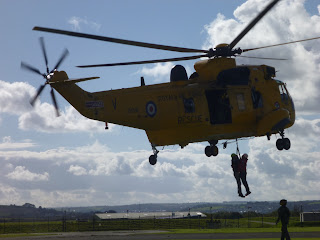