Rig for the club soon! I wrote in the last blog post. But not rig for the club yet. We had an SRT trip planned for the next Tuesday night, and I vaguely remembered how it’s rigged, but not entirely. So Dave handed me the rope, didn’t like where I put it, said “no!” and then Richard rigged it. Oh well. One also learns by proxy. If you get rigging of the entrance pitch in Bedford UTD wrong nothing is likely to happen. If you get it wrong in Devon Utd people die.

Nobody died. We all came down without problems. The first thing I did is check the dead dogs I knew were lying at the bottom of the shaft; by now they had been dead so long they didn’t smell anymore. I also went to where the mine drains; the previous times we had found that adit, but it would take quite a dig to allow access from there. I had a look; nothing had changed very much there. 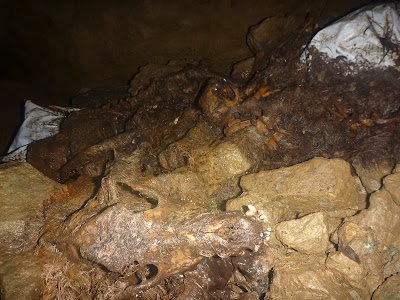 The dead dogs, or what remains of them

When all were down we had a walk around. We even went back to where the adit drains! I was dressed for that sort of fun; you have to go through water up to your chin t get there. I was wearing a wetsuit. But Richard and Laura followed, and they were wearing their default kit. C-c-c-cold! 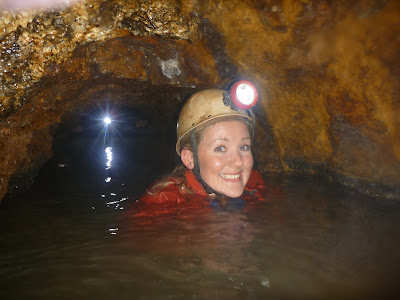 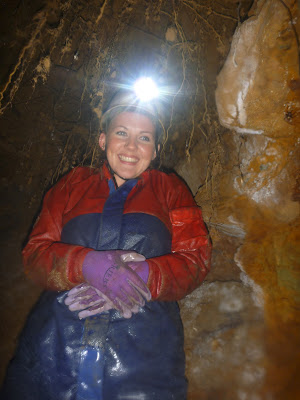 698 And this is where it gets you. The surface can hardly be more than a metre away!

I don’t know when we’ll do an SRT trip again. And I don’t know if I’ll rig it. But one day I’ll get there! And in the meantime I just have some old-fashioned underground fun...
Posted by Margot at 08:12