I used almost 2000 words in the first science outreach blogpost, about my first article as a first author, which dealt with the background of my thesis work. I here bet I will need much less for a public version of my first article that actually dealt with the monsoon. The official reference is: Saher, M.H., Peeters, F.J.C. and Kroon, D., 2007. Sea surface temperatures during the SW and NE monsoon seasons in the western Arabian Sea over the past 20,000 years. Palaeogeography, Palaeoclimatology, Palaeoecology, 249(1-2): 216-228.


How do you get from two meter of mud to a 20.000 year monsoon record? The quick answer is: very expensive machines. The longer answer starts with what that “mud” actually consists of. Most of it is skeletons. Bleached, white skeletons, with gaping, toothless mouths. Serene remnants of feisty, dynamic beings. Of planktic foraminifera! What? 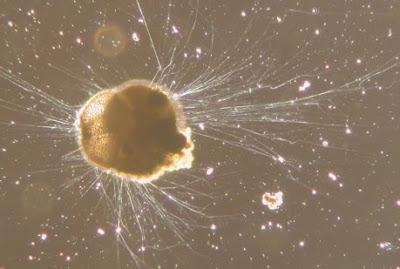 A live Ammonia tepida. Source: Creative Commons.
Foraminifera are animals consisting of one cell, which make an external skeleton. They come in all kinds of sizes and shapes. Thousands of different species of foraminifera live on the sea bottom, or even in tidal swamps. I’ll get to these later. Here I’ll focus on the few species that float somewhere in the sea; most of them in the upper 150 m. The so-called planktonic foraminifera. Together with all other life forms that float around, like the algae of the previous outreach blogpost, they are plankton. The most famous plankton is probably krill, but I think technically speaking it isn’t plankton but nekton, as they actively swim around. Anyway. Planktonic foraminifera; there’s only about 50 species of these. They are named after the holes in their skeletons, that in some species you can see under the microscope; foraminifera means “bearers of holes”. Through these holes they stick out their pseudopodia, that they use for catching food and such things.

For copyright reasons I direct people elsewhere for some cool pics of (dead) forams: have a look here

All species of planktonic foraminifera have their own preference of how deep they live, and in water of what temperature, and what sort of food they eat, and so on. And the brilliant thing with them is: when they grow their skeleton, the calcite it’s made of bears witness to these circumstances. One thing about the calcite (CaCO3) is that it contains oxygen, and oxygen has several stable isotopes. The “normal” isotope is 16O; 8 protons and 8 neutrons. There’s also very rare 17O, with an extra neutron, and even 18O, with 2 extra neutrons, is stable. And the fun is that due to their different masses these different atoms have slightly different properties. 16O, being lighter than 18O, evaporates easier. The ocean therefore has a higher percentage of 18O than clouds. And when clouds rain out, they preferably lose the heavy 18O. This in itself is already quite interesting; the further you go inland, the purer in 16O the rain will be, and if you for instance find some unidentified corpse somewhere you can just measure its oxygen isotopes, and that will tell you something about how far from the sea that person must have been living. But that’s a bit beside the point.

Schematic representation of the two mentioned oxygen istotopes. Source: NASA
So where was I? Oxygen isotopes. If you would evaporate lots and lots of water from the oceans, and not let it rain back, you would end up with an ocean with relatively much 18O. So where do you put all the 16O if you do that? There’s only one good storage place and that’s at high latitudes. In ice caps! If it ends up there it stays put for a while. So suppose you have 1 foraminifera skeleton from each year over hundreds of thousands of years, and you would measure the ratio of 18O and 16O in their calcite, you would see them get richer and poorer in 18O with the passing of the ice ages. And we took a few more every ~50 years instead of every single year, but the idea is the same. 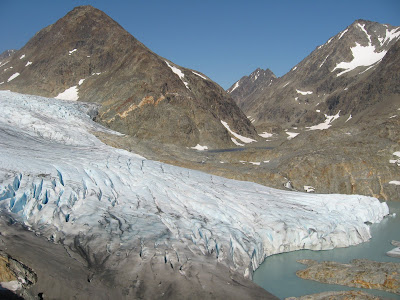 Lots of 16O! In this case disguised as Strupbreen.
For some reason I'm not too sure of (maybe there are blog-reading physicists that would know!) the foraminifera (or forams,as they are colloquially known) take up less 18O when the water temperature is higher. They seem to prefer 16O, and maybe in cold water they lack the energy to be too picky, or something. Anyway, the sawtooth signal you get is not just a result of how much 16O is stored in ice sheets, but also temperature.

An effect I understand more of is more or less opposite; sometimes a foram will accidentally grab a magnesium atom instead of the more common calcium to use for the skeleton. And magnesium does not fit as well as calcium does. And at high temperatures your crystal lattice shakes and rattles so much you end up with these normally ill-fitting atoms anyway. And why that doesn't work for 18O I don't know but it just seems to be that way Anyway, the magnesium/calcium ratio seems to say something about temperature, and temperature only.

What is good to know here is that measuring the ratio of 18O and 16O in forams is much, much easier than measuring the magnesium/calcium ratio. For the former you just pick 30 forams of the same species (the same preferences!), crush them, and feed them into a mass spectrometer. Easy does it. For Mg/Ca measurement, you have to clean your samples really thoroughly. Any Mg-rich filth sticking to your foram will screw up your measurement. So you carefully crush the foram (which will typically be around 0.3 mm big), and then subject the shards to a very uncompromising cleaning regime. You keep on boiling your samples in unpleasant liquids, and picking out bits of pollution with a one-haired brush. Tedious. 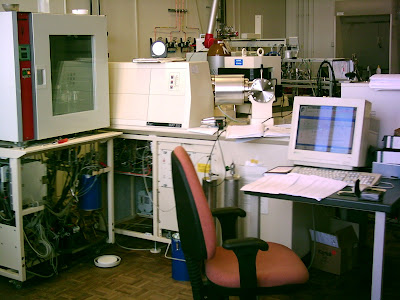 The mass spectrometer on which I did all my isotopic measurements

So how does this all get us any closer to the monsoon? What is the monsoon, really? I mentioned it in the first monsoon blogpost: technically speaking it is not torrential rainfall, as it is used in colloquial speech, but a system of seasonally reversing winds. As these blow from the land in the one season and from the sea in the other, and these latter evidently bring all the moisture, these summer monsoon rains have pushed over the original meaning of the word. But we stick to the reversing winds. The location where my core was taken, the monsoon has a clear influence on sea water temperature. Coast-parallel winds combined with the rotation of the Earth make water either be pulled up or pulled down, and in the western Arabian Sea it happens to be the case that the summer monsoon winds pull water up and the winter monsoon winds push it down. And that is relevant for two reasons. 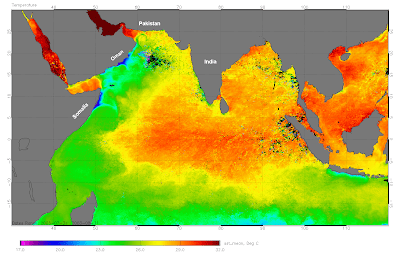 The cooling effect of the summer monsoon is really clear on this satellite image. Source: NASA
The first reason is food. Plankton is light-dependent, and can only live in the upper water column. If there’s food there all these little critters graze it away in no time. But food in the deep, and thus the dark, remains untouched, as they cannot reach it. But if the monsoon winds pull such water up, the nutrients become available. The summer monsoon season is therefore the period where there is most going on in the Arabian Sea.
The other thing is that the surface water temperature drops dramatically when this pumping starts. And that effect is clearly seen in the skeletons of the forams. Which prefer to grow then, as there is abundant food. In winter there are reasonable amounts of forams around, as the winter winds do accidentally stir some, but in the windless periods between the monsoons not much grows there.
And here comes the smart thing about my second article. What we now did is select one species of forams that mostly grows in summer, and one that grows both in summer and winter. We know how many of each tend to grow in each season. And we measured both species for 18O and 16O. And evidently, you don’t get the same results. That is, in some periods you do, but that then means the summer and winter were more or less the same. In some periods the year-round dweller has more 18O; a sign of cold winters. But the last ~8000 years, the summer dweller showed more 18O. So that was when the summer monsoon was strong enough to pump up the cold water! 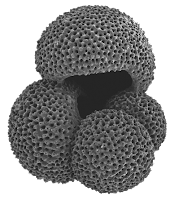 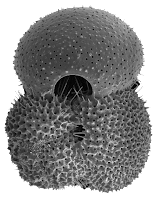 The two species I used: on the left the summer bug, and right the all-rounder. Pics: Saskia Kars
And with only 18O you only know relative temperatures. This can be solved with Mg/Ca measurements. But what we then did, and that’s the smart part, we only did one species, for which we then had absolute temperatures. The temperature difference gives you the other one! Saves you lots of time and money. And in science, there is always a serious lack of both.
So what did we find? In our records, winter was colder between 20.000 and 13.000 years ago. As one would expect; 20.000 years ago, the last ice age was still ruling supremely. Between 13.000 and 8000 years ago, the difference between the seasons was small, mainly because winters were not as cold anymore. And then, kablang! At 8000 years the summer monsoon kicks in like mad. Like mad, as in, taking only a few hundred years, which we earth scientists think is really fast. 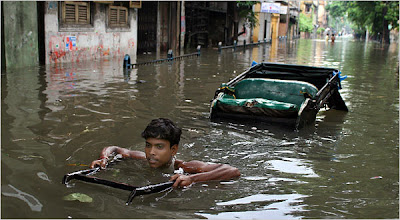 Heavy monsoon rains! Photo: the New York Times
The fact that you see these three distinct periods, and not just a smooth increase of the summer monsoon at the expense of the winter monsoon, may indicate that there are two stable states of the monsoon system: the glacial and the interglacial state. The period in between looks like a bit of a transitional state. And the system can swap quite fast!
Monsoons are generally linked to the astronomical variability of the sun, but that is a very smooth cycle. Evidently, there are thresholds and feedbacks and such going on that moderate this forcing. And our record is not enough to unravel which ones, or how, exactly, but it in one more step in the right direction!
Ps Ha! That was only about 1650 words. I knew it! Maybe again a few hundred less for the next article…
Posted by Margot at 20:19