It probably was just one of these days. The parking lot where we gathered was empty, except for a large white van. Soon everybody else showed up, except for one enigmatic Sam. After 15 minutes of waiting it turned out that Sam was not enigmatic at all, but the guy who had joined us to Old Gunnislake Mine, and who had been in that white van all the time. Of course. So we set off. In the wrong direction.

Dave drove on satnav, and that would have been fine, were it not that the Middle Ages are not really over in Cornwall. At least not everywhere. Who would have thought! The satnav tried to take us to through a ford. A ford! That these still exist in these parts of the world! And the water level would be too high. So we had to turn around and approach the mine from another direction. 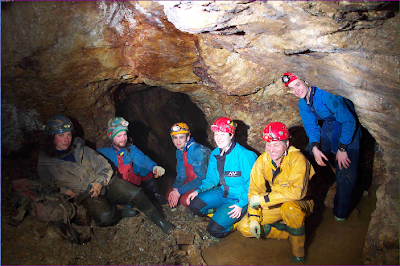 The whole group, except for Dave who took the picture, and two blokes who had set off to map a part of the mine
We managed to get there, and got ready. I put on my newly glued waders, knowing the water was going to be waist deep. A good test for whether the leak in the right leg was properly mended! My joy was substantial when I waded through the cold water unharmed, and engulfed by the sounds of suffering from the others, who were tougher and negotiated such conditions with different outfits. Yet not in silence. 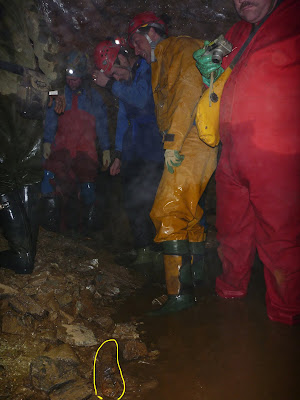 Quite close to the entrance Dave found an old pickaxe (outlined in yellow). Or at least what was left of it. 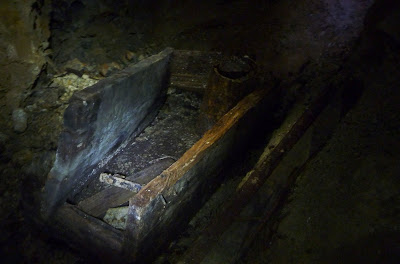 Further on we also found a wheel barrow
The mine of choice was a fairly bold one; the rock was heavily fractured, and quite unstable in many places. That required some crawling and squeezing through partly collapsed tunnels. And in the first half-flooded corridor after the first squeeze I noticed the caving gods had taken revenge. I must have torn the other leg, for now I felt the water ooze past my left knee cavity! Ah well. I still had one dry foot. 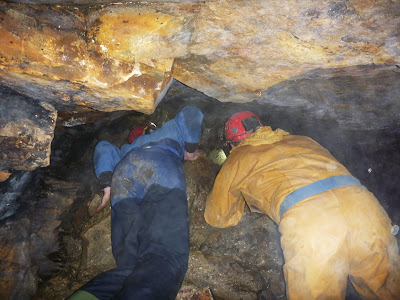 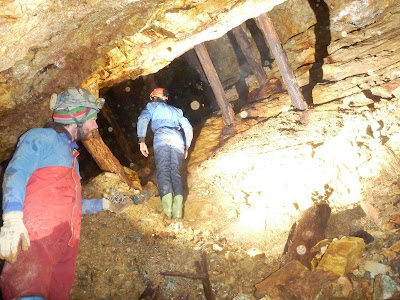 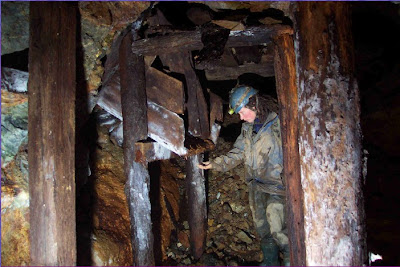 The chute; picture by Dave
When I was admiring a chute with Dave we heard an ominous rumble. A bit worried we shouted up questions as to what had caused that. The optimistic answer came: they had found a previously undiscovered tunnel! And “discovering” these things might well go together with bodily harm. Luckily this time this was not the case. The tunnel only went on for a few yards before the next collapse had blocked it again, but still! Nice to step into such long-abandoned spaces. 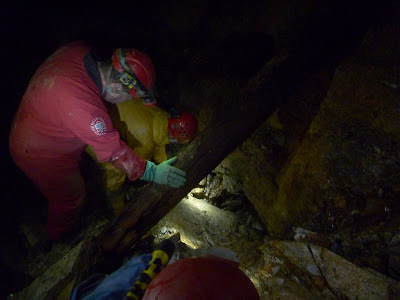 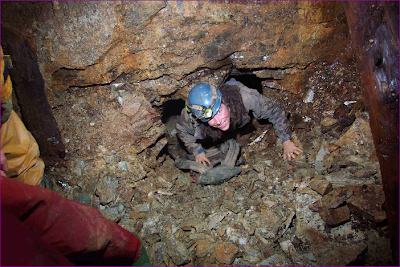 Me coming out; picture by Dave
During the slosh back to the exit Sam never tired of hearing of the leak in my waders. At least it made somebody happy. Even more so at my confession of not having brought dry socks. I realised, however, that me wearing two pairs of socks, and having a dry right foot, would spoil his fun a bit. 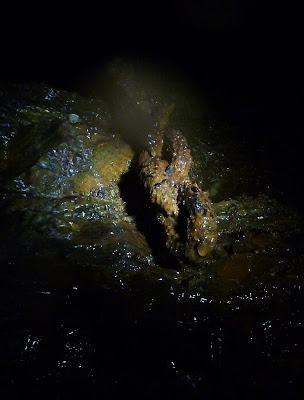 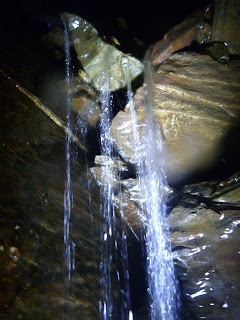 True to tradition we headed for an after-trip beer. But it really was one of these days, and we reached the pub of choice just in time to catch the landlord going home. Luckily there were more pubs around. And of course Dave got lost while going to the pub that was chosen as our plan B, which I think is atypical, but in the end we did end up behind a nice pint of Doombar. End well all well…
Posted by Margot at 19:34