I saw it! And it's beautiful. Not bad for a temporary solution. What this is about? Roland's house! After moving they had settled in to such a degree they could start to show off. And show off they did.

I took the not-so-scenic approach, as the scenic route requires a foot (and bike) ferry and my timing was crap. So I went the long way, over the bridge. As soon as you leave town behind and farmland begins you know you're close.

Roland found me spying for the right house number, opened the gate, and showed me around. What a place! A recent barn conversion (which sounds a bit odd to norwegiophones) but nothing overly modern about it. And with a sunny terrace just beside a meadow with sheep! Brilliant. 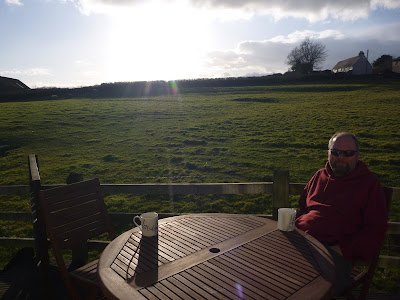 Roland looking a bit more jaded than he really is in his brand new back garden
Nobody would be surprised that it was night by the time I left, which gave the way back extra cachet. I took the scenic route back, which mean country roads lit by nothing other than my two little LEDs and the full moon. Beautiful! Except for the steep parts down, where my eyes watered so much the view was somewhat lost on me.

Roland and Maria are very happy with this new house, and it's easy to see why! I hope I'll be there many times more. I have cumin seed cheese, that should be enough to bribe my way in at least once!
Posted by Margot at 21:54