It all started in a uranium mine. And then several copper mines followed. But an iron mine, that was new! And perhaps for a reason; the iron mine we cavers would visit was quite far away.

I spoke of my enthusiasm for the next caving trip at lunch, and our new PhD student, Marta, was interested. And she's not English, so she was eager to try this new challenge out at the first opportunity. The good thing is that everything gets better with good company. The bad thing (or actually good, in the shock therapy sort of way) is that she lives in a narrow-roaded part of town. As if Neil wasn't bad enough.

I managed to pick both up. And off we went! In the diametrically opposed way to where my satnav sent me. I don't know what went into it. I have already jestingly called it a "Neil compensator" as it allows me to navigate to caves if I'm not chauffeuring Neil (I can't read maps and drive at the same time), but it seemed that it went spiralling out of control when confronted with the combination of both. I have to find out if it would now be willing to send me in something better than 180 degrees the wrong way, but Tuesday evening we were rescued by what might be the cause of this disturbance. Neil masculinely took out his iPhone and directed us. Really gloating in satisfaction, but who could blame him.

By testosterone guidance we found the right place, and got ready for a damp trip. After a nice walk to the nearest adit it took us about 1 meter to reach water so deep it filled Marta's boots. I was wondering if she would ever come with me, on any trip, again. But we moved on! This mine had been in use between something like 1895 and 1969, so it was the most recently used mine so far for me. Not that that made it any more high tech. Crude tunnels, disappearing rails, collapsing chutes, rickety timber ceilings. But an iron mine! And the uncorroded iron ore is like fairy dust. It makes everything sparkly and mystical. Beautiful! 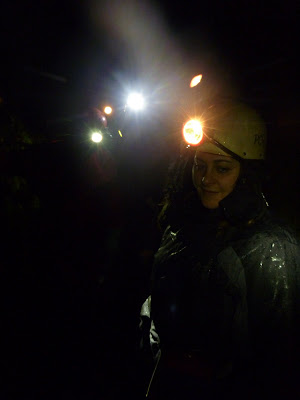 Waiting for Mike to open the gate of one of the adits. These are closed to the general public. Marta looking all professional up front. 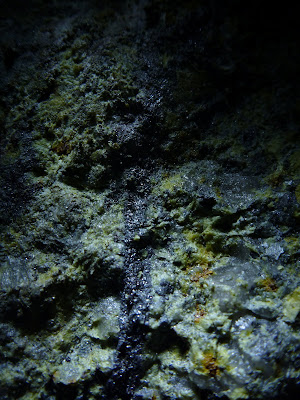 The iron lode, where it had gotten so thin they had stopped digging for it
Within 20 meters we found a spot where it became apparent that there were not only levels above us, but also below. A wooden floor with holes in it! At ground water level. And the cavers are not collectively famous for their low mass. This was OK in the beginning, but soon after it became so bad only Dave elegantly manoeuvered past, took some pictures, and got back. I was quite happily trying my new photography kit, which needs some more practice, but which makes much more things possible. And as things go, I forgot about the floor, and while discussing equipment with Dave I suddenly felt no ground below my foot. The holes! As they are water-filled not much that's nastier than getting a wet outfit, some tortured muscles, and perhaps a lost camera can happen to you. I have a waterproof camera, and was smart enough not to let go, but was still a bit stiff from Burnfoot the Horse, so I suffered no material damage but was noticeably more uncomfortable in the muscles than before. Luckily a supple, elegant gait is not a requirement for going on PCG trips. 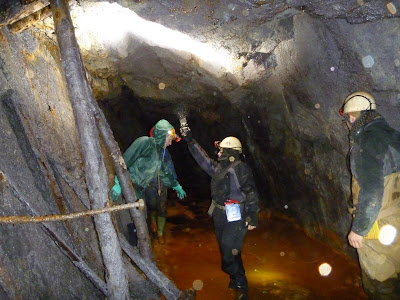 One of the spots with rickety floors. And notice Marta as a seasoned flash wielder! 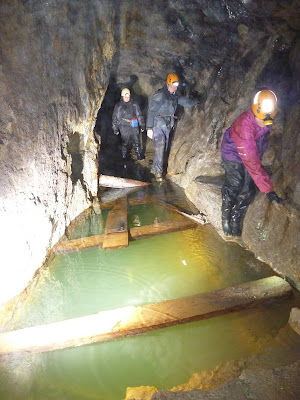 We went in several adits, every time soon running into the dead ends of the tunnels. And having to wade back to the entrance and going for the next. One tunnel confronted us with a, fortunately very conspicuous, but also large, hole, which luckily did not stop us. Marta also negotiated it like a routinier. It was a beautiful trip! 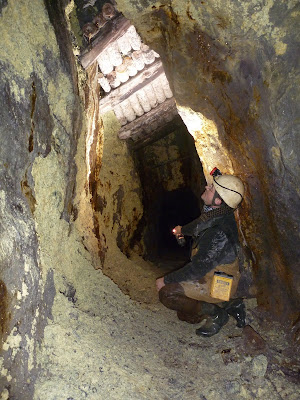 Neil  practiced with slave flashes. So with a slave and a Neil one can make quite good tunnel pics!
After three adits it had been fun, and we went back to the cars. And then to the pub. To my pleasant surprise Marta joined the caving group on the spot! It evidently hadn't been that bad. And after one drink we went back. Again relying on Neil and his phone, as my satnav wanted to direct us to Exeter. Where would we, two defenseless girls, have been without a man. Next week we might find out! Next week it'll be a cave, and Neil doesn't do caves. And I hope Marta comes again! And we'll see if by then my satnav will have come to her senses again... 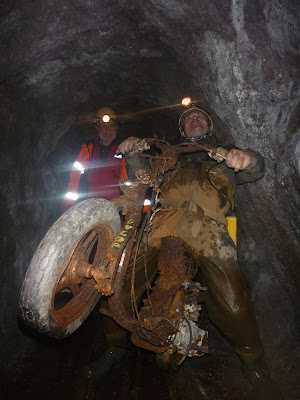 The unusual tthings you can find in a mine.  A rusty moped! Good for having Neil demonstrate his testosterone levels.
Posted by Margot at 21:30