To the young doctor

"What are you working with? I see you walking through the corridors all the time!"
A Vrije Universiteit secretary asked me this when we were on our way to go and grab a bite to eat between Emma's defense and the defense party. Evidently, nobody noticed I have been away for over 2.5 years. Or at least, not everybody did. I have been. But now I feel partly back!

Emma had finished her thesis on clams, and would defend it in early december. And I, by some mysterious coincidence, was not on fieldwork at that date, so I decided to go! I felt bad about not having come to thesis defenses for two entire years; a period in which the artificial lake of PhD students, of which I had been one, emptied itself quickly. But now I could come! And I had been missing Emma. She had the nerdiest sense of humour in the department (I assume it's not necessary to point out that's a good thing), and in Norway we had nobody who could match her skill. And the last person you get tot talk to is the defendant herself, but at least you can listen to them talking to others.

I wanted to first go to the department and just chat up to people, as I had some extra time. In the time I've been away, however, every single person I still knew there had moved office. I found absolutely nobody! I had to abort the mission and to go to the aula instead. Everybody would come there...

I saw all kinds of familiar faces, lit up in surprise as not many people knew I would be coming. But no time to chat up! The clinking sound of the pedel (the master of ceremony) was heard, and the cortege walked by. I then realised I had not thought for a moment who would be in the opposition. But I could have guessed! An old friend paraded past in a sharp suit. A bouncy chap called Frank I had shared a house with way back in '95 or something, and who in the meantime had turned into an eminent clam scientist. And another Frank! This one was a foram specialist, so he was less of a dead giveaway as an opponent, but that did not mitigate my pleasant surprise, as the sight of this guy in a suit is such that when he was opposing me in 2007 I was a tad worried I would get too distracted by it. And this time he was in a three piece specimen! 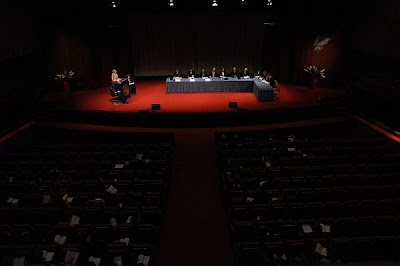 The defense kicked off with the layman's presentation, and then the interrogation. Bert, the omniscient emeritus, had the honour of going first, and did so by formulating a question that wandered so widely it left the audience wondering if Emma would have time to anwer even this one, let alone the questions the other opponents would have come up with. But of course all went well. And less than two hours after the clinking sounds of the pedel the clinking sounds of proud colleagues raising their glasses to the new doctor could be heard. And then the inevitable topic was discussed: who will be next? 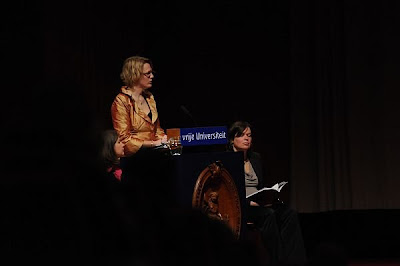 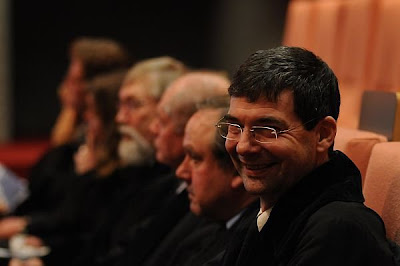 Dick, the promotor. He was mine too! 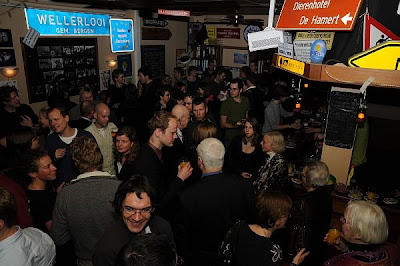 The reception in the good old students' room

After the reception I got an introduction into how public transport works, or in some ways does not work, in Amsterdam nowadays. Things change fast! But we got to de Bekeerde Suster without incidents, and had a nice meal before strolling to the Schreierstoren. It's quite a landmark, but I'd never been in! And only an hour after the beginning of the party the centre of all arrived. And she received a beautiful film about her research from an unexpected angle...

Defense parties are often in the middle of the week, and often don't last very long as everybody has to go to work the next day. But not this one! A selection of infatiguables set out for a highly questionable tavern. One of these tenacious scholars was Mark, whom I had asked, and gotten, asylum from. I could come with him on the back of the bicycle and sleep at his place, which saved me the trip back to Amersfoort and back. But that meant I could only go home when he went home. And so the night was long and wild! We got to know the non-VU part of her circle of friends. And left, drunk and hoarse, in the dead of night. At 4.30 I fell over in Marks guest bed and slept like a log.

The next morning Mark woke me at what felt like 5.30 but was, in fact, closer to 8.00, and made me an excellent breakfast, which was a good finale of my stay. From there it was bus, train, plane, bus, train, and I was back in Plymouth. This time I'll stay an unprecendented three weeks before I'll leave again... 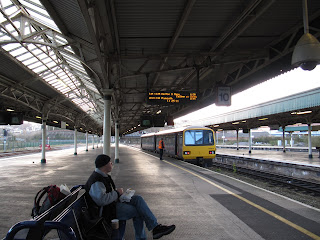 So Bouncy Frank the Hobbit is a respectable clam scientist now and a member of promotion committees... Great!

It was his first time! But, yes, indeed! And he was wearing a suit... but you would have had no problems recognising him anyway. Still bouncy and hidden underneath some sort of an afro. I hope there will be pics (with him on them) bobbing to the surface...