I went go-karting once! I was an absolute non-talent. I just shot over the track (well, I crawled, probably, but it felt like shooting to me), and frantically tried to keep up with all the curves and whatnot that appeared in my way. Life seems quite like that!

One of the creatures that jumped in front of my wheel was my own birthday. I managed to somehow make it past without injury! I did not feel like throwing a party: too much fuss, and all the probable dates were already taken by christmas parties. If I reincarnate I want a different date of birth. Anyways, I did not want to do nothing, so I thought the best way around was having a quiet pint with those nearest. And some of these thought it was a good idea.

When I woke up it felt like just any other day. But before I left home my phone already signalled the first incoming congratulations. And my mailbox was overflowing with them! I had brought pepernoten and chocoladeletters for a coffee break; with time whizzing by in such a flurry I could just as well blend Sinterklaas and my birthday. And then I bumped into Roland, who gave me a huge mug (huge mug! For gallons of coffee! Yay!) and furry dice. I seem to radiate either chavness or a painful lack of it, for I tend to get these for my birthday. By then I really felt festive!

And the day continued all the way to pub-time with more messages coming in through various media. I even got a christmas present from the dearly missed NP coffee people! So sweet. I won't be here with christmas, so I figured my birthday was actually a perfect day for opening that. I was touched! And then we went to the pub. More and more backed out, but well, the hardcore evidently was left. And a real English pub, with "lauw kwezelig bier" as Roelof so eloquently puts it (here my English fails me in translation) on your birthday is quite nice. I even was phoned a few times from the Netherlands. And when only the hardest of cores was left Roland took his harem (he was the first, and the last, man standing) around town for hidden gems of pubs only he would know about. 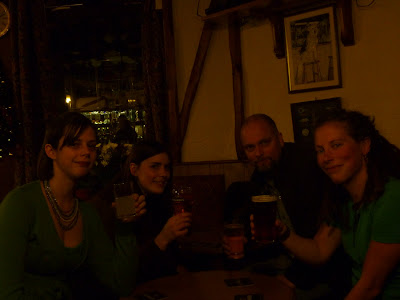 The hard core: Sam, Lou, Roland and me

I was home at a reasonable hour, and I spent the rest of the evening finishing my book, immersing myself into war, death, cold and loss. Dead Danes left and right! And then it was time the sleep of the 34 year old. Today it was me, soon it will be the year itself that has a birthday! And thanks to everybody who made mine a good one.

Unforgivable! I forgot... :(
Will make it up to you as soon as we meet (which should be soon)

Not unforgivable at all! But I'll be happy to collect a belated hug!