Tuesday is the best day of the week! It is, anyway, if you're a member of the Plymouth Caving Group. After a working day, mud awaits! And darkness! And eldritch body odours! Men with blinding headlights!

This time our goal was Wheal Russell, an old copper mine. As is starting to become a habit, Neil picked me up, and off we went, onto the very Enlish, narrow, hedged off country roads, to some unassuming recess demarcated by lots of men with waterproofs and helmets. This time the recess was adorned by an impressive water wheel, probably belonging with the mine. Too dark to take pictures, unfortunately! The group this time was extra big, as it was a combination of two caving groups. The more the merrier!

In the beautiful night (this time, highly unexpectedly, no rain and storm!) we walked to the mine. Somewhere along the path some random mine entrance gaped. A hole in the rock face! I was delighted to see that in a company such as I was in, it is regarded completely normal and acceptable to not be able to resist the temptation, and to compulsively scurry in. And it was a beautiful amuse-gueule! It was a modest, not too spectacular secondary copper mine, but it was encrusted lushly with some lichen or some other somewhat modest life form that was phosphorescent, giving me the impression I was in some mine-shaped planetarium, where they had produced some spectacular starry sky-effect on the ceiling. Great! Some cute little bat may have thought so too, as it evidently had chosen this location as its domicile for the winter. 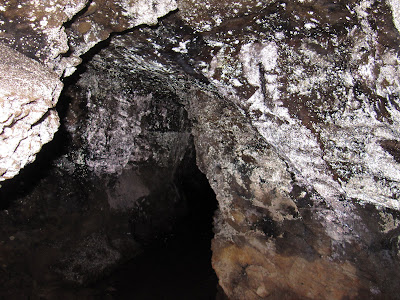 Not easy to take a picture of the strange biota on the walls, but just imagine the cave without the flash, and the encrustings more luminescent...
Excited we came out again. Now we were ready for the main act! The mine entrance heralded its approach by strewing around small dynamite storage houses. And after having admired these we crawled into the actual main mine entrance. It was a low hole, and quite flooded. So after the crawling in one only gained more space to move around because the floor sloped down, and the water got deeper. I awaited my turn, watching some of the men (some of which were in jeans!) make their way in, often accompaned by groans of "owww.... my crotch....". I liked this mine already! When it was my turn I stuck my camera in my waders and went. The water came up to my ribs! The waders, however, come up to my armpits... that was a very fortunate purchase! 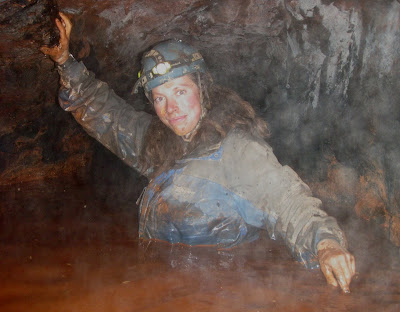 We waded to a large, gloomy room, supported by thick, failing wooden beams. Beautiful! And from there it was one long tunnel into the hillside. 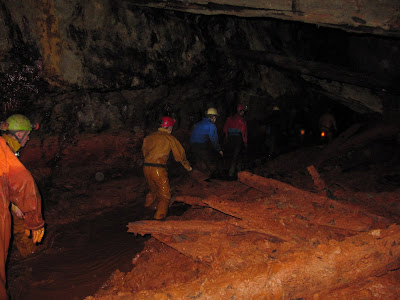 The large room near the entrance

The tunnel seemd to follow the copper ore vein. It must have been rich; it produced a plethora of great coppery stalactites! 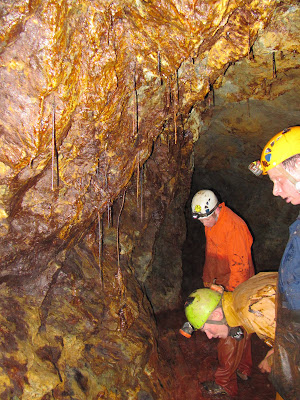 At some locations the stalactites were thin and modest 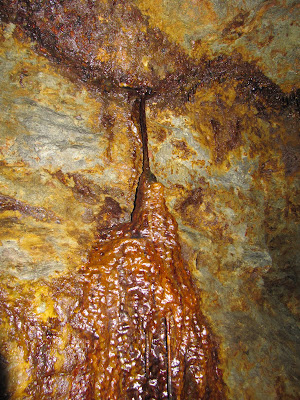 Here the vein is very conspicuous, and it's made an entire column! 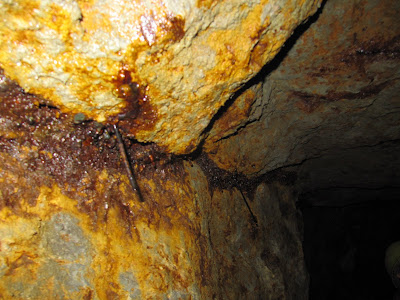 The vein disappearing in the dark 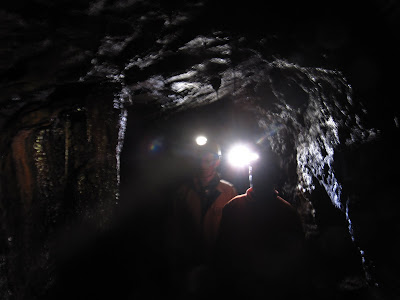 For us, it looked more like this... that's the disadvantage of using flash potography. It's needed, but it's not how we get to see things! 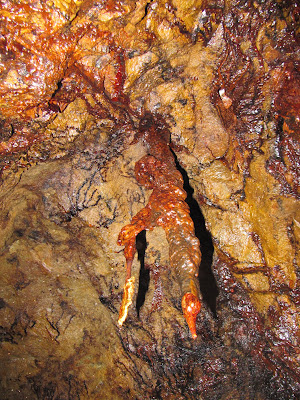 Some of the stalactites were very impressive 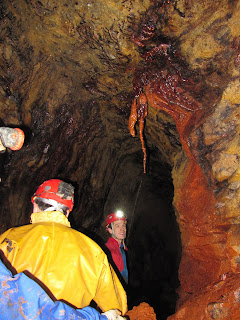 Quite many of the stalactites were not the typical slow dripping specimens, but they literally pissed! This one even around a corner. 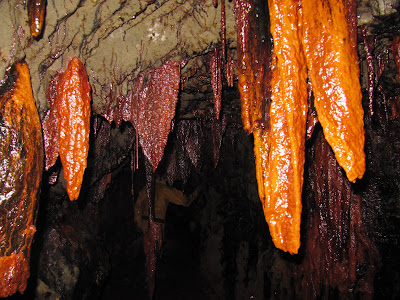 Sometimes there were so many it created a veritable fairy landscape 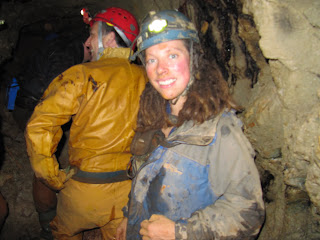 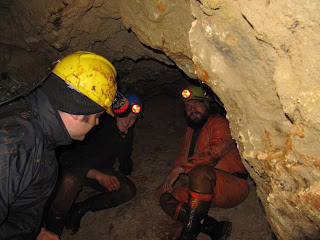 Here we had reached the end. And you could feel it; oxygen had become scarce...

Already at the great hall we had split up; Dave wanted to take some time  for pictures, while the impatient already hurried deeper into the earth. When we, the impatient, came back to the hall, I decided to wait there for the second group. It was such a stunningly beautiful place! The ceiling was so high I'm not sure if I have seen it, and several working platforms of decaying wood could be seen. I just sat there, enjoying the overpowering atmosphere of despair, decay, hopelessness, darkness and several of these immaculate things. 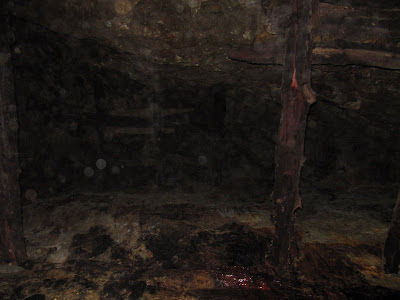 This was what you saw, or rather: hardly saw, when you looked up in that room
At some point I thought I heard a roaring freight train. Strange, as there should be none within hearing distance. Then I realised it was the approaching second group! I turned off my light, and just enjoyed the eerie sounds of their approach. The unusual acoustics made them sound like a howling and grunting ghost army. Slowly the sounds became less and less distorted. And then I saw the faintest of lights! And soon the blinding headlights were resting on me, and the voices were nomal human voices again. Time to brave the deep mucky waters again, and get back! When we were struggling through the deepest bit I heard Neil say behind me "this is where they stop making fun of the guys in waders..." and it was true!

With the orange water streaming out of my jacket, but happy, and with dry socks, I came out. What a mine! Happily chatting we walked back, when at some point we heard charming noises. And to my surprise we saw that these were made by two very sociable ladies that, in several ways, would not look out of place in our sophisticated company. 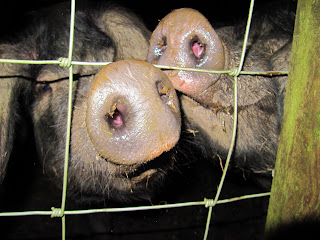 After some ear-scratching and nose-fondling we pushed on. Back to the cars! And in spite of Neil having managed to, on the way in, losing his phone, and leaving on the light, and now continuing this train of practical behaviour by losing the keys, and suspecting they were in the locked boot, we managed to get back onto the road with only very minor delay. And then it was off to the shower! And plenty of time to look forward to next week's trip...
Posted by Margot at 12:14

Good report. I was highly incompetent on the night but the mine was great. Now I am only still looking for my camera ...