My TV worked! And I immediately went looking for programmes on old crap. And in that aspect I was not disappointed. I quickly found "Man on earth"; a programme in which Tony Robinson (most famous as Baldrick) pokes around in the earth and looks for signs of the interactions between past man and climate, or at least so it seemed. He seems not to have such a good name among archaeologists and palaeoanthropologists. "Time team", that he presents too, was described by one of ours as "a programme in which they come and dig a trench, in which Tony Robinson is being annoying for a day or two, and with which they find out nothing that was not previously known, after which they fill it up again and leave". 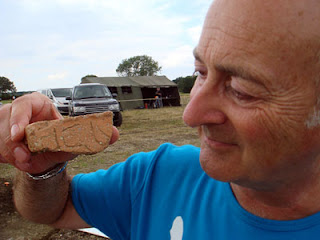 This time he was faffing around in Gibraltar, where the last Neandertal colony seems to have lived. After whose demise the road was open for homo sapiens. And what did he say about it? For 400.000 years we have been around. And we survived through the biggest climate changes in human history! Brilliant! Almost as much information in that sentence as there is in the first picture of my car on the blog..
Posted by Margot at 09:22