God bless the grab! Sometimes Dutch sayings are useful guidelines in life. Sometimes they can be a tad difficult to translate though. Any Dutch, or otherwise Dutch speaking, readers who would have an idea as to how to translate "boem is ho" into English? Anyway. The idea is clear, I presume.

The first car I went to have a look at turned out to be the car I ended up buying. It's standing straight in front of my house! I have not only a vehicle, but also an insurance and a temporary parking permit. I have low levels of fuel, though, but probably enough to make it to a petrol station. Driving, that is, and not only a bike with a jerrycan.

So how did it go? Duncan advised me to go for it. The few things I was not sure of did not worry him. And then it probably is no reason for worry. So I phoned the lady, and talked bussiness on Sunday. I did not effectively buy it then: I could not take it with me without an insurance, and I would not be able to park it somewhere near my house without getting that permit. Furthermore, she wanted cash, and I can't get that much money out of a bank machine in one day. So monday was the first possibility! And we took it. 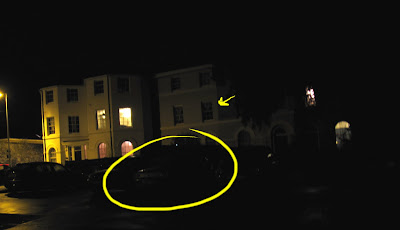 There it is! And the arrow points to the windows of my house. Clearer pics to come!

It was dark when I parked it! So no clear pics. They are expected soon. And for the curious: it's a '94 Ford Fiesta Freestyle. 5-doors. Blue with a grey bonnet. And I need to do some testdriving in daylight! All the controls are in strange places... I honked when I tried to switch on the light...

PS And then it was daylight again. There really IS a car standing there! 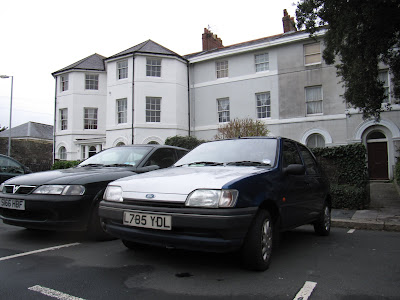 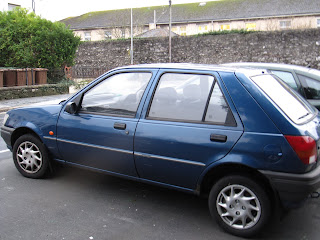 It's beautiful! It looks like my car. And indeed the controls seem to be in strange places...

Enough saltless remarks! Concratulations on buying your car and getting your TV to work! And now I have to finish the frickin' FOM expres and stop procrastinating...