Trying to improve my veg beds

I had been conspicuously unsuccessful growing food. I could grow peas! But not much else. I had had three cabbages, but altogether they had only yielded one meal. All my leeks together had also only resulted in one meal. My cauliflowers had come to nothing. Things had been looking good regarding courgettes, but the slugs got to them before I could. So I had decided to grow my courgette family indoors this year. I still wanted to use my veg plots for something! But maybe the soil was a bit poor? So I decided to see if I could enrich it. I have a compost heap. The whole point of having one is creating compost! And I also always have a commercial bag of compost lying around. So I decided to dig around in my raised beds, and mix in some more organic material.

The compost heap is small and young and didn't yield much. I only had one bag of compost. There wasn't an awful lot to mix in! But it was something. And that's better than nothing. As some of my plants haven't survived the harsh early spring (a Coprosma that probably indeed was a bit too fragile for the local climate, and a Hypericum that really should have managed), I will have to go to the garden centre anyway; I might buy another bag or two. If I do that before I move my peas and brassicas outside, I will mix some more in. I hope that helps! And that I get better yields. For now I think I have only made an open invitation for the neighbourhood cats to have a good poo. But so be it! 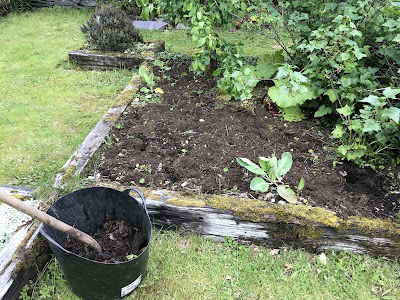 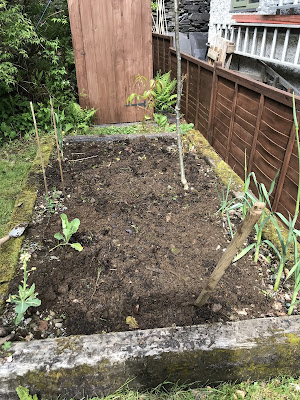