This post should have been published a while ago! I seem to have forgot. I had a chat with Stefano on the 12th, and with the information I gave him the went back to the programmers to see if they could sort things. We chatted again on the 15th. And then on the 19th. And on the 21st, I was sent another download link. I installed that version of the program, and hey presto, it worked! Only a short while before my exam, but it worked now. And I could send emails in Welsh again to my Welsh-speaking colleagues (mainly outside the school, of course). Hurray!

I had been really happy to be able to use Welsh voice recognition software, as that allowed me to keep doing Welsh things, such as writing emails in Welsh, and mark Welsh language assignments. But it didn't last! At some point it stopped working. And that happened in a rather busy time, so I postponed trying to deal with it. And by the time I was ready to deal with it, the University had gone into the Easter break. So nobody was available to help me! But the Easter break came to an end, and the language centre was open again.

I quickly had a meeting with Stefano, the bloke who had introduced me to it in the first place. He asked me to send a few screenshots of error messages; he then shared them with a guy called Dewi, who knows more about the software. He came with a suggestion, but that didn't work. So we had to go back to square one.

I had another meeting with Stefano, and we tried several things, and some point he had the brilliant idea of checking whether I had been using various versions of the software. And I had! So we uninstalled the new version and installed the old one. Such a simple idea. I suppose I could have thought of that myself, but I clearly didn't. And Stefano said he thought that with that knowledge, and concomitant screenshots, Dewi would be able to think of something clever to fix my newer version. That one seems to have a much bigger vocabulary, so it would be nice if I can use that.

I do hope I can get the new version of working some day, but for now I am merely happy I have some working software again! I have a big exam coming up, and I wouldn't be able to do that without Welsh voice recognition software. It will already be difficult enough WITH the software; without it, it would be impossible. 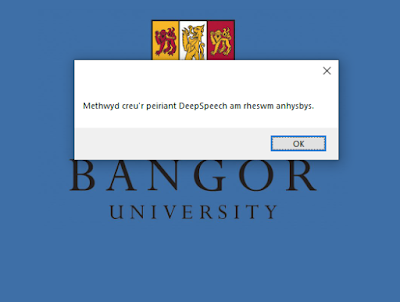