I am such a Welsh veteran by now, I was already going to vote for the Senedd for the second time. The previous time I was a bit confused by the Welsh system. This time I was used to it!

Like the previous time, we would be voting for the Senedd and the Police and Crime Commissioner. And I know who I would be voting for. I went early in the morning. It was still quiet! But with social distancing still in force it still meant I had to wait a few minutes. And from the polling station, one actually had quite a good view on the very snowy mountains. I hadn't expected them to be so white so late in the year!

Later, the results came in. As I had expected, my constituency keeps its Aelod y Senedd: Sian Gwenllian for Plaid Cymru. That suited me fine! The regional seats went to Conservative (2x), Labour, and Plaid. Two Conservative seats too many! But I did what I could.

The PCC went from Plaid to Labour. And all over Wales, Labour did well! As I had expected. Everyone I knew was pleased with being under a Labour government during a pandemic. I know I live in a bit of a bubble, and I won't know that many people who would have preferred Johnson, but still. I'm glad we keep Drakeford for a while! Keep at it, Wales… 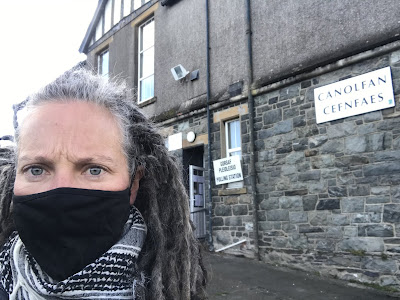