I finished the painting of the extension on a Monday morning at 7 AM, as I knew that soon afterwards, it would start raining, and not stop any time soon. I could find these last bits if they were underneath the edge of the roof and would be sheltered from the bad weather. But the edges, which had been caulked a long time ago, needed filling. The old caulk had gone crumbly. But it never was dry long enough for me to decide it was a good time to finish the job.

Then one night I had my usual weekly Skype dinner, but the connection went funny, and we called it a day fairly early, I decided the evening was still young. I also knew it would still be dried the next day, but after about two would get another very wet spell. So I thought this may be just the time window I needed!

I grabbed the caulking gun and the sealant I had in mind for the job. It wasn't technically caulk; that isn't always the most weatherproof and durable. This stuff was. And I wanted it to last.

The disadvantage of it being not caulk was that it was a lot stiffer. I don't like these guns anyway; I have had my share of frustration with them in the dig. At least I didn't have a particularly big one; the real big ones you need big hands for. And quite unlike the specimens in the dig, mine wasn't rusty. But with this stiff sealant, I basically needed to push with both my arms like a bodybuilder flexing the muscle just above their armpit in order to get the sealant out. Not ideal! But I just did that, and squeezed the stuff into the gaps with my finger. I don't suppose it is the way the manufacturers imagined it, but that is the way it happened.

When I was done, I pulled the rope back up over the roof, put the ladder (that I had used to get up to the flat roof) away, de-rigged the whole safety line, and decided to put the neighbour's ladder away some other time. It was now late!

I hope I did a decent job! And I hope it lasts a few years. We'll see! 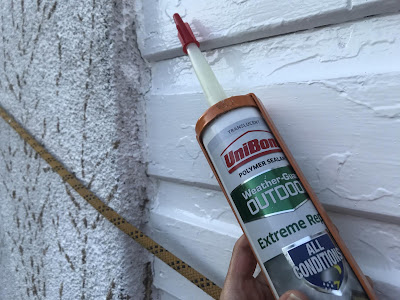 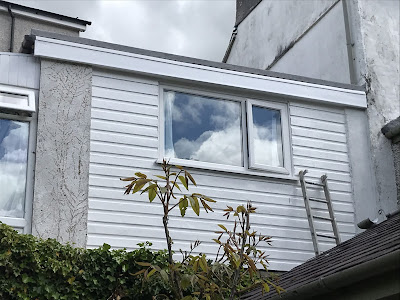