When I bought my car it was already scratched. I don't mind! That doesn't affect the car's performance and/or structural integrity. But one day I expected the roofer to come with a trailer and pick up some of the roof waste, and in preparation for that event I parked on the street. That allowed him to park close to the pile of waste! And that was all well but I noticed someone coming down the road, realising it was a dead end, and doing a clumsy three point turn in front of my house. My car wasn't in a good position for that! And later I saw that I had a new scratch, and not only that; the car that had scraped past mine (must have been the clumsy one) had snagged behind the edge of the bumper and pulled it a bit off the metalwork. Oh dear! Still not affecting the car's performance and/or structural integrity. But now it sticks out! And would snag even easier! And that's bad. So I decided to see what I could do about it. And I decided on drilling little holes and tying the two bits together again with some cable ties. I think it works! It's less snaggy now. And I suppose the car is more Margot-esque now... 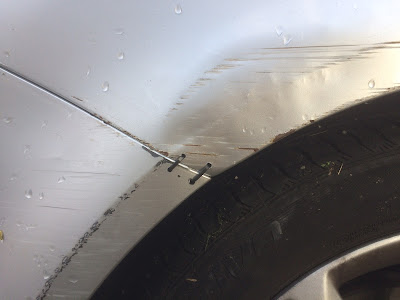