Rainy day in the field

I had been in the field on Tuesday, and I was going on Thursday too. On Tuesday we had almost been blown out of our clothes; now the forecast was rain. Oh well; fieldwork in October isn't expected to be all sunshine and gentle breezes! And this trip is a bit emotionally charged; the previous time, I felt drowned out by the middle-aged blokes. Would this time be different? I figured I should claim a site and defend it. I hate it when the men do the teaching and the women are only seen to do things like bring up the rear! What sort of message does that give? But it's difficult to change it.

So how did it go? I figured I could claim the pillow lava. Normally, that is our first stop. But this time the forecast was crap and Dei figured it would be better if we would storm out to the very end of the peninsula, and then work our way back. So no pillow lavas first! And one of the men had put dibs on the far site. So we went there. At some point on the beach Jaco hesitated. How to proceed? Over the causeway! So I lead the way. But at the end of the causeway I noticed we had overshot our goal. We had to go back a bit! I told Jaco but he didn't see what I saw. I went anyway as I was sure. Dei appeared and came with me. When he gave the thumbs up to Jaco the latter was convinced. And he brought the students with him. Great! So what a woman says is only valid if it is confirmed by a middle-aged man. There we go again.

Dei and Jaco did that outcrop. And then I must admit I realised I wasn't sure where the next outcrop was. We were doing it in the wrong order and I had only focussed on the pillow lavas and the melange. So I had to hang back. Better preparation is needed next time! Dei and Jaco talked abut the carbonate near the lighthouse. And the next outcrop was another one I hadn't prepared a lot. Jaco did that one. I just took pictures for the website.

After that outcrop we sat down for lunch on the pillow lavas. And then at some point when I was still eating, Jaco stood up and started lecturing about these too. So I didn't add anything all day! And that was part my fault. I need to be better prepared and I should bring up the topic with Dei and Jaco. Which is intimidating! Tell men that they are propagating gender stereotypes and that maybe they should help break them is always tricky. You tend to get dismissed! But I think we should make sure we divide the outcrops beforehand, that we make sure we're prepared (but there is more incentive if you have some reason to assume you'll actually get to use that preparation) and that the men don't butt in unless asked. Then we can be of use and taken seriously! 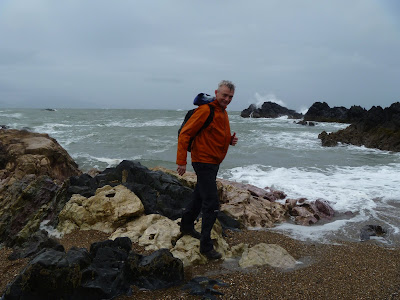 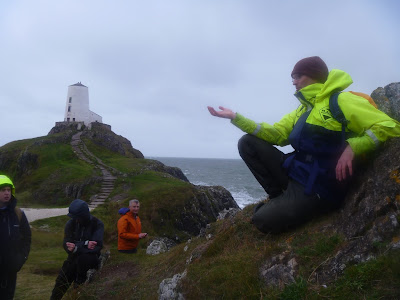 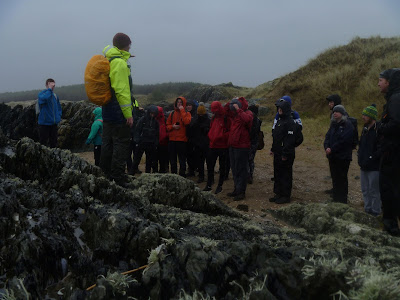 Jaco on mudstone and in rain 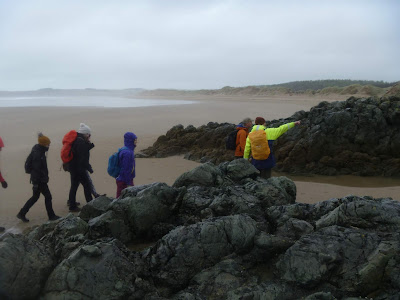 Onwards, between lumps of pillow lavas! 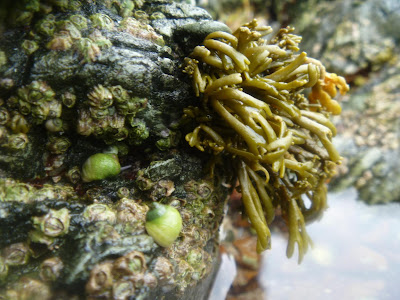