Another entry into the cake competition

It had been a while since I had competed in the School of Ocean Sciences cake competition! But the time had come again. So what to make? I decided I wanted to make a vegan cake. Everybody eats vegan stuff but vegans only eat vegan stuff, so in order to make sure everyone could eat my cake (like my vegan colleague Sarah) I wanted to go vegan. And I know very well it's better for the planet. So I googled a recipe! I just looked for 'vegan cake recipe' to see what would come out. And the first recipe was too difficult. It started with milled chia seeds! Next. Then I came across something called' easy blueberry cake'. Now we were talking! I like blueberries and I like easy baking. So I went with it! And it looked so easy I could make it the very morning.

I had got the ingredients ready beforehand. So I made the batter! And indeed, it wasn't hard. I plonked the cakes in the oven and then did the other things I normally do in the morning like my morning routine, having a shower and having breakfast. And then they were ready! And they looked good. Success, so far! 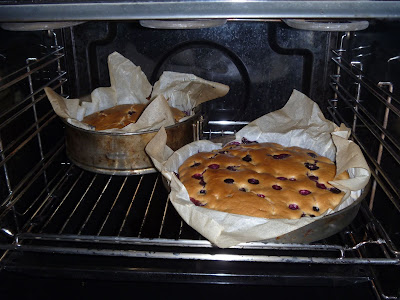 I brought them to work and delivered them to the lady who had organised things. The competition is anonymous so you're not supposed to carry your own cake in! And when cake time came up so did I. I could try my own creation! I thought it was quite good; it was moist and fruity (does that sound questionable?). What I didn't like so much was that you could taste the sunflower oil that was used as a replacement for butter, but hey ho, cant; have it all. And I was glad to see Sarah show up! Would have been a bit sad if she would have been teaching in Bangor just on one of the few cake days she was actually OK with trying some.

I was up against a chocolate cake. These tend to lose! I had experienced that myself. We would see! But when the results came in I saw I had lost. Well I had tried! And to be honest. I tend to be relieved when I lose as I don't have to bake again for the rest of the year. So congratulations and commiserations to the winner! Next time I'll be judging only...