I go to Cwmorthin (the valley) all the time. For Thursday Nighter trips, for dig nights, for getting to Nyth y Gigfran or Rhosydd or longer walks, you name it! But I had only been in the valley itself and a tiny bit on the flank for Nyth y Gigfran fun. But there is more to the hills around. I had wanted to explore these for a while! And then one day an opportunity presented itself.

I had decided with our PhD student and ThursdayNighter Kate (aka Bob) that one day we should go for a walk. And I had hoped to see her during the week so we could check on suitable weekends. But she was away often! One week with a suitable weekend I asked the other PhD students where she was and they said just working at home. So I mailed her! Was she up for a walk? She was! And she was up for a round trip over the hill crests around Cwmorthin Valley. Great!

We met at the usual car park. I started applying sunscreen while waiting for her; it was going to be a very sunny day! And then Kate rolled up and did the same. And we agreed we would go counterclockwise.

We started on the spoil heap of Cwmorthin. Not the most comfortable way but it's fun. And when we had scaled these we just picked out way up the hill, through the heather and the bilberry bushes; there only were faint sheep paths. It was slightly uncomfortable in our shorts but on a day like this, you don't want to wear long trousers.

When we got to the wide ridge we stopped for a cuppa and some chocolate chip bread (I had been baking again). And then onwards! A path appeared and the walking got more comfortable. We had views into the Oakeley like I had never had them before! And the views on Wrysgan were lovely too. 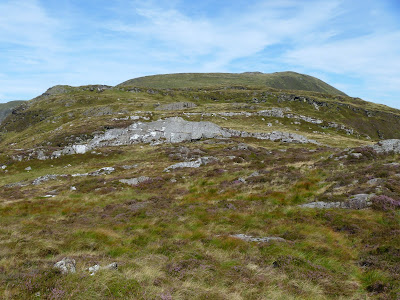 Seen by me for the first time: the wide crest of the hill above Cwmorthin 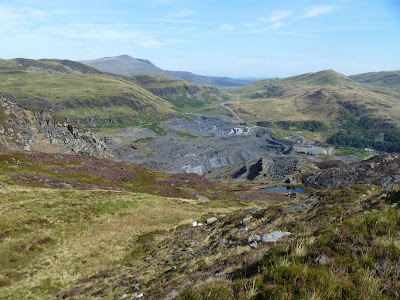 Oakeley seen from above 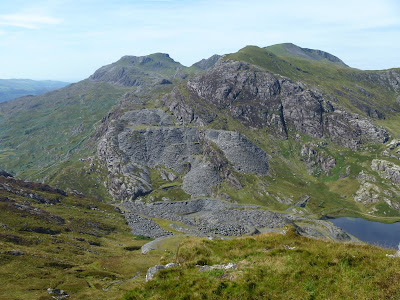 Wrysgan seen from an unusual angle


We walked on. Soon we saw Llyn Conglog. We decided to loop around that. And when we approached we saw the small lake next to it. It looked like an infinity pool! We couldn't resist that. We undressed and went in. Lovely! We swam to the other side and back and were very happy. And then we continued our path. 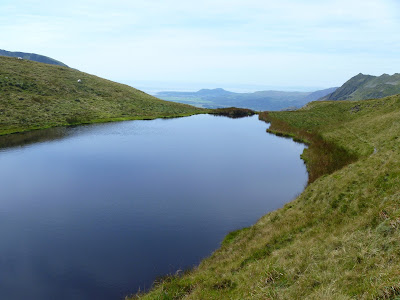 
On top of the cliff overlooking the entire valley we had lunch. And then we made our way, with some trial and error, to Rhosydd. And on the other side we went up the inclines. We aimed for Moel yr Hydd and from there picked our way down to Wrysgan. We had some more sarnies there and then we went down the incline. A very good walk! And we weren't done with the day; Kate suggested a cup of tea afterwards. I thought of the Lakeside Cafe but that was closed. We went into Blaenau instead. And there we found a cafe that had fresh ice cream. That would do! 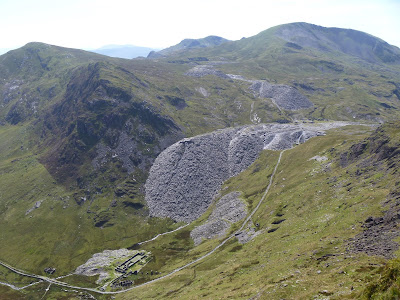 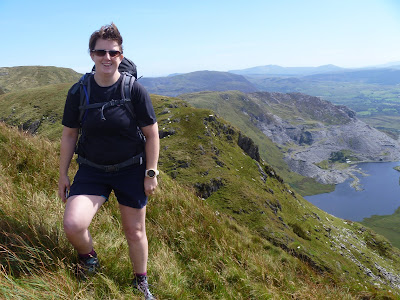 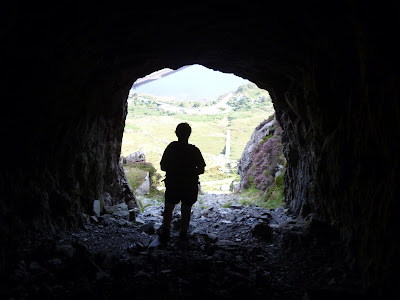 Near the top of the incline

We enjoyed our ice cream leisurely watching the goings-on on the Blaenau high street (riveting!) but it was nice. And then our ways parted! I had forgot my wallet (honest) so Kate paid for the ice cream, and she thought me getting the opportunity to reciprocate was a good excuse for doing something like this again. But I  personally don't need an excuse. It was a lovely walk and lovely walks are even better in good company!
Posted by Margot at 08:39