They've arrived! My new doors. One of the big things still to do in the house; at least, on the ground floor. (One of the bedrooms, and the kitchen, still need wallpaper pulling and re-painting). When I moved in, most of the doors didn't close. And most are not solid wood so you can't just plane a bit off. And not only did they not close; several were hideously ugly, and one was both quite damaged by a pet of sorts, and lacking the entire closing mechanism including the door handle. And I managed to get several doors to close in the end, but four still didn't, so it was time to replace the lot! I restricted myself to everything that was and always had been an inside door. The outside doors could stay; that needed something more sophisticated than something that just opens and closes. And the doors that had been outside doors, but had ceased to be that due to various extensions, had glass in them so I left them alone too. But that still meant seven doors! For the kitchen, bathroom, all bedrooms, living room and landing. And I had ordered custom-made doors made of reclaimed wood as I had seen them in Guy and Kate's house. They were gorgeous! But I wanted to only order them after the main dust had settled (I needed space to put seven doors, after all) and as well, they are not made in a jiffy. So I ordered them mid June. And they came mid August! I put them in the conservatory; seemed a good space as with the garage roof finished, I now could empty out all the firewood, tools and whatnot I had kept in there while the garage was busy being re-roofed, and make space for the doors. Now I need to get the joiner to put them in place. I hope he'll do it and do it fast! I can't wait! 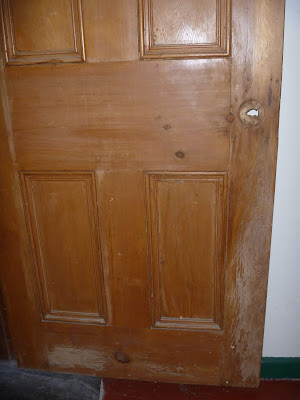 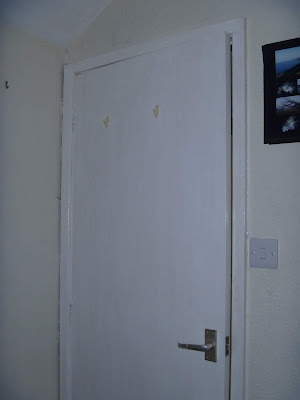 As far closed as the upstairs bedroom door wants to go 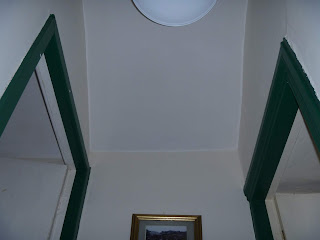 This gives an idea of the various door sizes; the upstairs landing 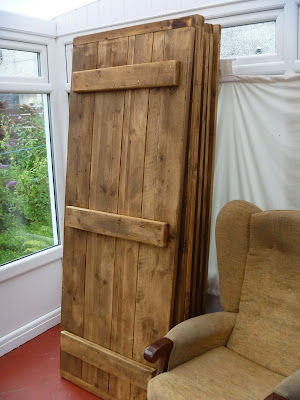