Second round of knotweed poisoning

There is Japanese Knotweed quite close to my garden. There is also a clump closer to the neighbour's garden. It doesn't do any harm but mortgage lenders get nervous because of it. When my father and stepmother visited, the latter volunteered to go out with my knotweed killing contraption to poison it. She did all that stands close to my garden.

I wanted to do the other clump too. I now have the kit; I might as well! Sooner or later the neighbour will want to sell his house, and if not, then whoever deals with his will might. He won't be able to own it forever. And if by that time I have managed to kill the knotweed it would be easier to sell it! And he's been helping me a lot, with DIY advice and lending me kit and such, and offering to put out my bins if I'm away; it's nice to be able to do something back. And as well, if I try different methods on the clumps I can compare what works best. So one sultry evening I stepped out with my murder weapon again.

It's a bit uncomfortable work. You teeter around on smooth rocks put there by the river, and have to wrestle yourself between the stems, and you have to somehow keep track of which ones you have already done, but I think I did it. And now I'll have to wait! The first clump was done in July and the second in September. I also upped the dose a bit as it seemed a bit small. We shall see next year how the next clumps come up! I hope smaller. And then even smaller the year after! And after that... 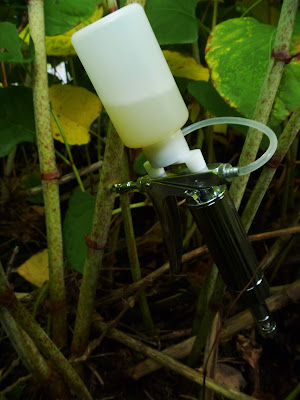 Murder in action (I hope)