There's always room for improvement! I tend to be OK navigating but I know I could be better. And even if not; doing some practice with the climbing club is always nice. When an email came in about a morning of practice near Capel Curig I signed up. I had been a bit frustrated about having felt the need to spend a sunny Saturday indoors (stuff to do!) and this would get me out of the house. And the Crimpiau, our target, are pretty!

We met in Cafe Siabod for a cuppa beforehand. 'We' were Simon, Eifion, Alan and me. Simon, who recently qualified as a Mountain Leader, lead the exercise and told us what he had in mind. He would make us navigate in turns to rather specific places. Nice!

I was first. I navigated to a nearby footbridge. I got confused at one point as the path made a wobble that wasn't resolved on the map! But otherwise all went well. Alan did the next leg, to a little hillock. From there we compared stride size. It's good to know how many steps is 100m! The men knew but I didn't. We had them pace 100m, and they all ended within a meter of each other, and I just measured to them. Useful! It's 76 steps (only counting my left leg) for me. Under these specific circumstances. 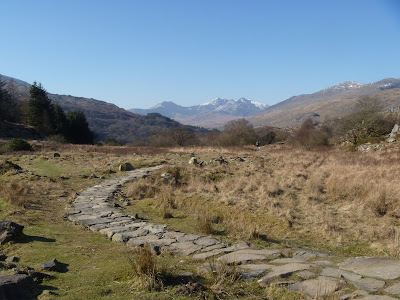 Snowdon in the distance 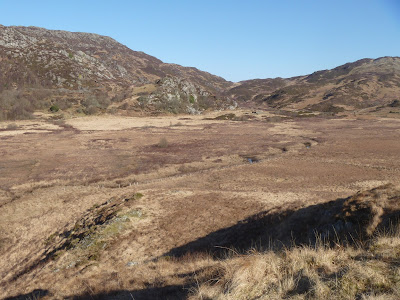 Such a sunny day


Eifion took the next leg. We also took time to chat and admire the landscape in the glorious sunshine! But then Simon made us pace to a next benchmark so no talking took place for a while. All were counting in their heads!

At that next location we were above the pass to Llyn Geirionydd. Lovely! We took a triangulation on Moel Siabod and y Grimpiau. Then we sat down for lunch. Lovely! The men unpacked their bags and compared gadgets. Whistles, knives, emergency shelters, repair sets, bivi bags; it all came out. I was using my bag mainly to lug warm flasks around! And my repaired down jacket, which I ended up not needing. 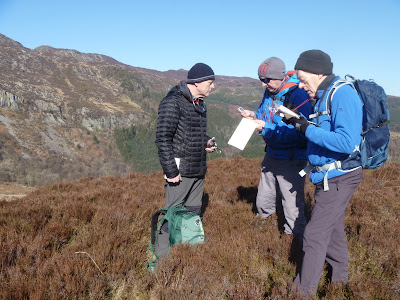 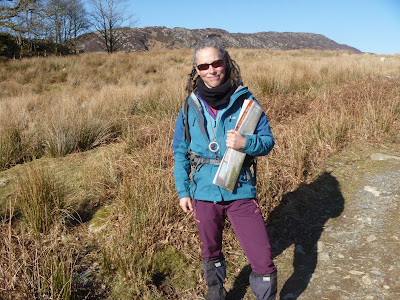 Happy me with map

We then went back, via some more locations set out by Simon. And by about 2PM we were back at the cars! It had been nice. It was such a lovely day. And I had done quite some Welsh practice as only Simon isn't a confident Welsh speaker.

When I was in Capel Curig anyway I phoned Rose, the owner of 'my' new house. Could I have a look at the Japanese Knotweed situation? She said she was away but her brother was cat-sitting; I could pop by. And I did! He was very nice. He first took me into the garden but it looked like you couldn't get onto the riverbank from there without getting tangled in brambles. We walked around and tried again. Some googling of Japanese Knotweed had taught me what it looks like. There was a fair bit! But it seemed not to be spreading into the garden.

The I was invited in. I had a chat with the brother, who was a hydrologist. He had all sorts of views on Academia! And had lived in the Netherlands. And keeping talking seemed to run in the family. The cat joined in too! I look forward to living there...
Posted by Margot at 07:39