When I moved into my new office I decided I should make it fit my needs. One need is very basic; I want to be sufficiently warm in there. In my old office, I tended to have to wear two pairs of trousers on Monday and Tuesday in winter, as only by Wednesday would the heating have caught up with the sheer cold that would have invaded the office over the weekend. The culprits (I am convinced) were two single pane windows. I blocked one with cardboard; the other one was essential for light and view do I left that. And this new office has only one single pane window, and has as many radiators as the old one in spite of being about half the size, but still. I have become rather resentful towards single pane windows! So I decided to do something more substantial than taping cardboard over it.

In front of that window stood a noticeboard. One of those old-fashioned ones. It was big enough to cover the window and then some! So I decided I would fix insulation material (in the shape of the window) to the inside, cover it with white material to make it less obvious that that was what I had done, and then add fixings to keep the noticeboard firmly fastened (but removable) to the window. And that is a bit of a noisy job so I came in on a Saturday to do it. I had already put insulation there; I had chosen a roll of woolly stuff made from recycled plastic. And I had bench covering for making it look tidy.

I placed the fixings and drew the shape of the window on the board. I then cut the insulation material to size. I had been wondering how to fix the stuff; I had been thinking of very long screws, but I wasn't sure if metally sticky-outy bits would be a good idea. So I decided to drill holes in the board and pretty much sew it on. So I did! I didn't have a big needle with me, or suitable thread, so I brought one the following Monday.  And finished it! Including the neat covering in white material so it's not conspicuous from the street I felt the need to do this work. It's done before the real cold hits!  And then I am sure one pair of trousers will be enough. Even on Monday. But in summer I can just put the noticeboard away and enjoy the extra light. I can have it all! 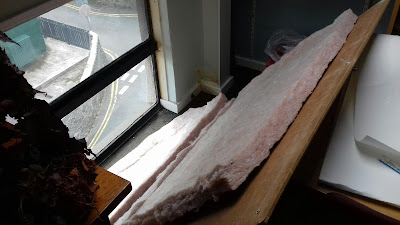 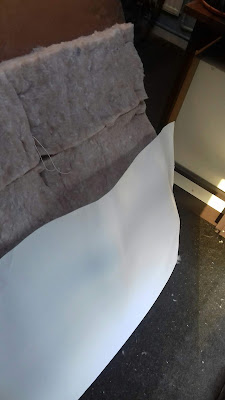 Covering the insulation material with neat-looking white stuff
Another need I have is a bit more specific; my office will often contain two bicycles. I keep one there for in case I drive to work but have to lecture in Bangor. I can just use that bike if I don't come in on one, and as well, not be afraid of it being stolen as it's not a very good, expensive, or glamorous bike. But it gets me there! But I also park my new road bike in the office if that's my transport in; it's good and expensive and I don't want to leave it outside in the wind and the rain. There is a bicycle park thingy with cage walls and a roof, and I could find out how I get the key for it, but that does not provide the level of protection against the elements I would like. And my office does! But having two bikes stand around takes up a lot of space, so I wanted to mount them on the wall to tuck them out of the way a bit. That was easily done! Bring it on in the new year! 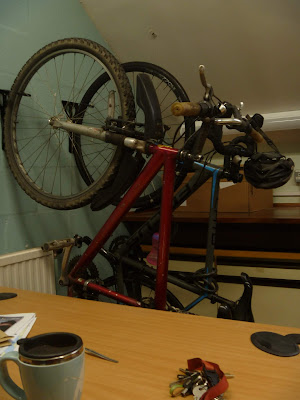