Ceiling work for the electrician

The electrician needed access to the ceilings in the extension! And I had better make that happen. So on a sunny Sunday I started with the hallway. After not too much time I had a nice channel for him! And this time I had closed all the doors (except the front door) and put a sheet down, so tidying up afterwards was a doddle. I also started on the master bedroom, but the sun was shining in and it was too hot a job. I left that for a bit! The electrician won't be there all too soon.

The master bedroom is sizeable, and I don't want to put a new ceiling in, so I think I'll just fill the gap with some wood I might have lying around, or something. But the hallway is small; I might very well take the entire plasterboard out and replace it with a piece of flame-retardant MDF. I like wood better but well, what can one say, I suppose it's a good idea to keep the risk of the house going up in flames low. And getting it shouldn't be difficult; there's even a builder's merchant up the road. They probably have stuff like that! I could just go and get it on foot... 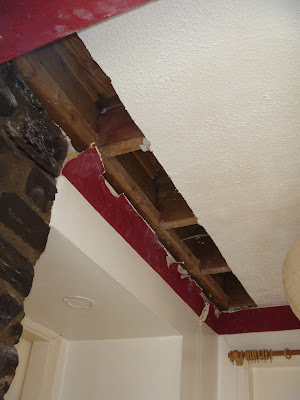 The slot in the hallway 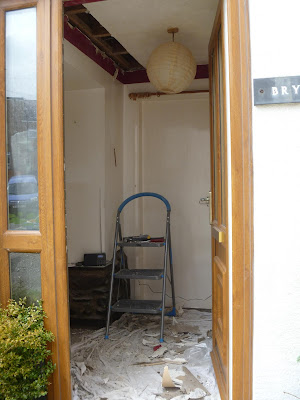 Seen from the outside