I read a Dutch book again. It was written by some chap who had been living in Syria in the years before the war. I thought that was interesting; a nice balance between an insider and outsider view on a country that would soon develop into a tragic war zone. So I gave it a go!

My opinion is a bit mixed. It was indeed interesting, but the writer pissed me off no end within 50 pages. He describes some bloke is hitting on him, and then he immediately draws the conclusion the guy may well be a paedophile. What?? Since when is homosexuality and paedophilia the same thing? What world does the writer live in?

I did continue. It did stay interesting, but I remained a bit wary. I wasn't too keen on his behaviour towards women either. I know Syria might not be a society in which you can exercise a healthy view on women as citizens, as society as a whole doesn't see them like that; most women are kept well away from him. I thought, though, that this bloke takes things a bit far in the other direction; if he encounters a women anywhere he seems to go straight into sexual pursuit mode, without much further thought. When the secret services tap into that and have some horny woman phone him he initially falls straight into their trap. Surprise, surprise!

And Syria? Well he did give an interesting insight into day-to-day life in these fairly inconspicuous days before the outbreak of the civil war. The religious differences, the view people of different religious persuasions have of each other, the relationship he has with his landlords, how you get things done, and all such things. So do I recommend it? Well, no, I just can't get over his offensive remarks. But if you're not sensitive to such things and you want to read about Syria then do go ahead! 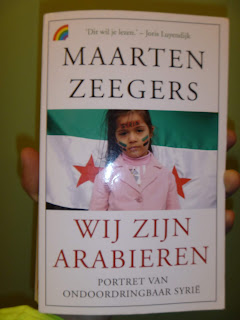