The garage is mine!

When I got the key to my house I didn't find it empty, and I found the garage less empty still. It was a mess! I did a big run to the recycling centre with the joiner, as he has a big van and can transport an awful lot in one go; that already helped quite a bit. I then did a number of trips in my own car. It takes less, but still a fair amount! And then one rainy Sunday I took the last big batch there. A door, a small table, something that looked like a demolished door frame, and whatnot.

When I got to the recycling centre the 'wood' skip was close to empty. When I was done (admittedly, there were three people throwing stuff in) it was as good as overflowing! And that means I now have the garage to myself! It feels good. I suppose I could have cut some of the wood up and used it as fuel, but I just wanted to get rid of the stuff. It's nice to have a clean slate! I can worry about fuel later... 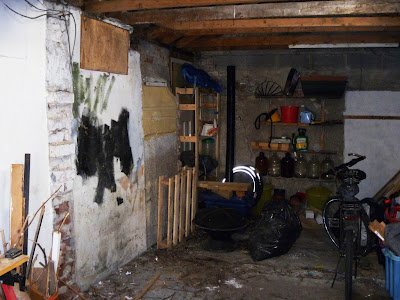 The bit of the wall with green and black paint on it was all covered by waste wood
Posted by Margot at 09:20